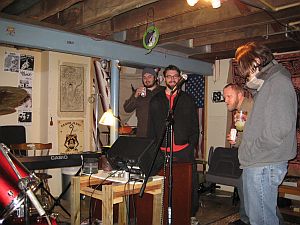 Hello and welcome to Kickacts. com. Tell us a little bit about 600 Stanley, were you can be found on the web, and your MySpace page is a little vague, who plays what?

Aaron Rodenberg- Our MySpace page is 600stanley@myspace. That’s it. That’s our contact.
Abe Ford- Were not web savvy.
Gary Folz- And none of us are trained musicians, so we switch instruments.
Ben Rodenberg- Were drunks
AR- Yeah, That’s basically it.
AF- No, we’ve just been drinking.

2-You have probably been asked this a million times. Are you related to Carl Rodenberg? If so, has that helped or hindered you in your music endeavor?

B-I’m related, but that doesn’t matter
AR- Yeah, he’s Ben and I’s uncle, but it hasn’t helped or hindered anything. He told some good stories last thanksgiving.
G-I don’t know if I am. Maybe.
AF- I met him in a bathroom once. 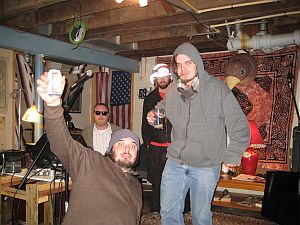 4. I hope you take this as a compliment, but your recordings sound like they were recorded in the trunk of 1975 Coupe De Ville next to Jimmie Hoffa’s body. This to me symbolizes the “underground music scene”. Do you have plans to press them and get them to the public?

AR- I don’t know, my record player is broken.  How did you know about Jimmie Hoffa’s value as an acoustic dampening device?
B-Man, he’s going to think were a bunch of assholes! We don’t know how to record. They were supposed to be reference tracks anyway.
AR- Yeah, I can still remember getting pissed about some of the stuff that was put on MySpace. I’m glad someone likes it though! 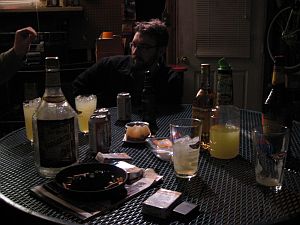 5. What do you think about the present music scene or lack of here in the Evansville area? There are not a lot of places that
encourage and allow original music anymore. Care to address that?

B- I think there’s so much potential in this town it’s ridiculous.
AF- The music’s there, you just have to find it. The Deerhead has some good original music.
G- Lanhucks is good for original music, too. But people want to hang in meat markets (get laid at bars).
AR- I think it has to do with attitude as well. Most people aren’t looking for culture when they go out. But I think if we had a good all ages venue like Bogart’s (Cincinnati) or Mississippi Nights (St. Louis) there would be a more positive atmosphere for originals.

6. Got any “best” gigs and “worst” gigs stories to share?

AF- The second gig we played at Lanhucks was pretty good.
AR- Yeah, the first gigs at Lamasco were packed as well. We fried a monitor at Boney Junes, but there were only about twelve people there to see it. It was still pretty cool though.

7. You guys are trying to make music that is not status quo, (not the band, but music in general) How would you best describe it?

AR- We’re the original cover band.
B- We try to reach out to different genres. When we switch up instruments, it brings a different vibe in different arrangements. It makes a difference if Gary’s playing guitar or bass, as opposed to just singing, for example.
G- We pull it out of our asses.
AF- Yeah, but a unicorn’s ass!

8. Who are your heroes and what inspired you to take up making music?

AR- I love so many different kinds of music. I guess my dad and my brother Dave would be my biggest influences as far as playing goes
B- Stevie ray Vaughn, Jimi Hendrix, my brother Dave.
G- Vince Gauraldi, Ali Fakir, Alice in Chains, my dad, grandpa, Jesus
AR- Oh, me too also with the Jesus.
AF- Diverse. I don’t know how to word it.

9. What do you guys do for day jobs to support your music?

AR- I’m a bartender at Lamasco, so I work nights
B- Server at tumbleweed
G- Indentured servant
AF- I sell bike parts. 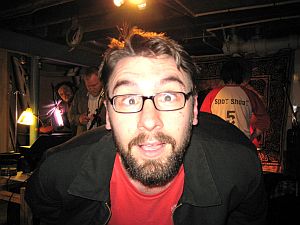 AR- all of human history has led up to this point, where we as humans understand the general scope of things. We should definitely be seeking out new places to colonize. And I think we have learned enough about eco-system balances that we could responsibly do that. In outer space.
G- But people are going to die.
B- Still, it’s better than spending money shooting bombs at each other.
AF- Well, it’s a big yard.