1. Welcome to Kick Acts, Ed. Tell us a little about yourself.

First off, I would like to say thanks to Kick Acts for the time and consideration. It’s greatly appreciated! I’m a Metal head who loves collecting Old School Metal records (vinyl) and I love creating original music. I’m married to my wonderful wife Cathi, and have 2 great kids that I know of… (LOL) and have great friends and a great life! Wouldn’t change a thing.

2. You’re currently slinging the guitar in a band called Factory Damage. Tell us who’s in the band, how we can find you online and any upcoming shows where we can come see you. 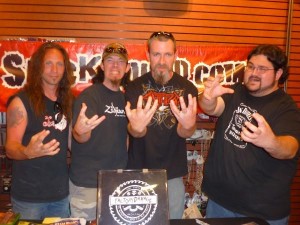 Our main websites are: www.myspace.com/factorydamageband and www.factorydamage.com We have a House Party coming up 5/29, other than that, we’re working on new material and getting our newest member of the family, Val, up to speed on all the tunes we have. Keep checking back on the above mentioned websites for future gigs.

3. You guys are an original metal band. Do you throw in cover tunes like the other local bar bands? What sets you apart from other metal bands?

We have some covers that we do. We’re actually in the process of putting a few more covers into our set, along with new original material. A Bar Band, we’re not. We play just about anything from Festivals to Bars and everything in between. We don’t give into current trends and nowadays it seems like there’s only Death/Black Metal bands out on the scene. While we do play fast, its not all about palm mutes for us, its about great hooks, a great chorus, and killer riffs. Some of our tunes are suited for radio and some aren’t. We’re on the fence. We can play with the Heavier bands and we can play with the lighter side of Metal/Rock bands. It’s tough to slot us in any specific Metal category. We’re just really diverse and that’s what sets us apart from the others.

4. How long have you been a musician? Tell us about some of your experiences.

Well, I’ve been playing Guitar for 20 years off and on. I would say seriously playing for about 15 years. The first 5 years, I was on and off the wagon. The coolest experience I’ve had thus far would have to be sharing the stage with Kerry King of Slayer. He was down in O’boro a few years back doing a clinic. I got up on stage with Kerry and played “Black Magic” and played it right on the money. Kerry toasted me and the whole bar was chanting “ED! ED! ED!”. That’s one experience I’ll never forget!!

The first time we played the BBQ-Fest here in town sticks out to me. We started the set with very few people in the crowd, but by the time we hit the 4th song on the set, there were a SEA of people. Mosh pits everywhere! A kid got his tooth knocked out! We were playing Megadeth’s “Peace Sells” and a kid fell off the stage, knocked himself unconscious, blood went everywhere, and the Owensboro Police Department came in and shut us down. Very exciting! Don’t get me wrong, we don’t want anybody to get hurt, but looking back, it was a killer show for us! That kid ended up being OK, so all is well. Worst gig…the very next week after our killer show @ the BBQ-Fest, we played a bar with no one in it but bands. We’d get done playing a song, and all you could hear were crickets and the occasional other band members clapping. It was terrible and typical. One week your a Metal God, the next, you might as well not have gone @ all! But that’s band life. You got to take the good with the bad.

6. What can you tell us about the most entertaining gig you ever played?

We played a show here @ Frankie’s sports bar with Left with Scars and the Midnight Biker Chicks. Frankie’s was sold out! 400 plus easy. It was so busy, they were turning people away @ the door, cops were directing traffic out in front of the bar, and by the end of the night, Frankie’s had sold completely out of Alcohol! It was AWESOME!

7. Tell the readers about hobbies other than music.

Love watching college basketball and college football when I get the chance and hanging out with my family.

8. Who are your musical heroes and influences? Why?

Tough question. I would have to say Dave Mustaine from Megadeth would be the biggest influence/hero for me. He has a very unique style of playing and isn’t a conventional player. Dave is a smug one, but he’s usually right on the money. I love the way he tells it like it is, and if you don’t like it, tough SH*t! I also dig a lot of Hendrix stuff! The man could play. Enough said!

9. Do you have any advice for someone just getting started in playing music? Anything they should avoid?

If you’re just starting out, learn to play by ear. Its your best bet and YOU can develop your OWN style of playing, opposed to starting out reading music and learning scales. This way you create your own rhythm personality, instead of doing it the “Corporate” way. Learn scales after you’ve been playing by ear for a while. That way you don’t sound straight out of the Musicians Institute. Be yourself. Be original, and don’t follow the Pied Piper!

I’d like to give a SHOUT OUT to all of our Men and Women in the U.S. Military! They do an AWESOME job protecting our great country! My brother is in the Air Force and is heading to Iraq this summer. I pray for his and everyone’s safe return home. I salute them all!