On July 10th Calling Corners will be opening for Drowning Pool at Woody’s. Tickets are only $18!!! 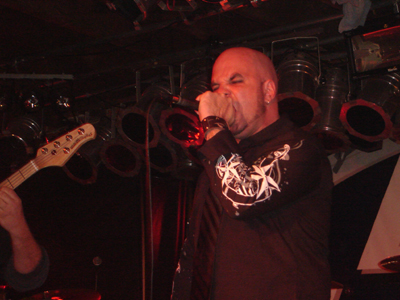 1. Can you tell us a little about yourself – both personally and in terms of your various bands? Well, I’ve been playing drums since ’93, interested in music since I was a baby.  I’ve played venues doing original music all around the midwest and as far south as Houston, Texas.  Did my first coverband gig in 2002 as the singer of monkeygland in Aaron Harrelson’s absence.  I did that for about 6-7 months and then went back to doing original music and playing drums.  From there I played with a couple of original acts that never made it out of the basement.  <insert second divorce here> In 2005, I went back to playing covers with Six Hill’s Giant, played the various clubs in the Evansville area, did Ski Day on the Ohio, Evansville Freedom Fest, aaaand built up quite the tolerance for Cuervo and Jagermeister.  I did that until January of ’08 and it was time to move on.  In April of ’08 I went back to singing and joined Matt Camp and Calling Corners.  Since our first show in August of ’08 we’ve traveled the Midwest and have gotten numerous opportunities to share the stage with some really cool national acts (Bobaflex, Pop Evil, 10 Years, Theory of a Deadman).

2. How would you describe your sound? I’m not sure that we really have a definitive “sound” as of yet.  Matt had so much material when we started the ball rolling that I think we’re still looking for that sound that defines Calling Corners and still stay in the mainstream.  The sound I think we have so far is somewhere in the genre label of Trapt, Red, Alter Bridge, or Breaking Benjamin.  Check it out…www.myspace.com/callingcorners

3. Who are your influences – both personally and musically? Personally I would say pretty much anyone with a desire to move forward and succeed.  Anyone I can learn from.  The go-getters, I’m not a big fan of the person that sits back and waits for things to happen or expects things to be handed to them.  I like to make things happen. Musically, I would say Tommy Lee, Scott Phillips, Ivan Moody, Myles Kennedy, Brandon Osborne, Jacoby Shaddix, the list goes on and on. 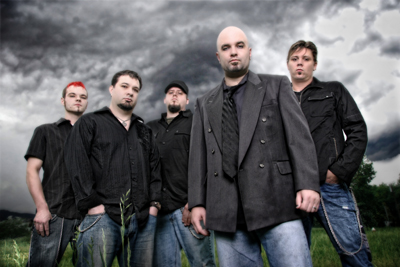 4. What’s ahead for you? Shows, shows, shows to get our name out there…we just finished recording our first EP with Greg Pearce, we’re getting ready to send that off for mastering and duplication.  We have a couple of different management companies looking at us, some radio interest.  Just waiting for a finished product.  Our next show locally is July 10th at Woody’s with Drowning Pool.

5. Are there musicians you’d like to play with in the future? Right now I would say the musicians I’m currently with, because we’re all on the same page.  And alot of times that can be hard to find.

6. Do you think that downloading music is a help or hindrance to musicians? The major labels say that it’s essentially the heart of all the problems they are having in terms of lower sales – would you agree? If we’re talking legal downloads, I don’t agree.  I think the resources on the Internet where you can download music and/or videos (Itunes, MySpace, Ilike, Youtube), really gives a band more of an advantage at being heard than they might’ve had ten years ago, because you don’t need some major publishing deal to be heard worldwide anymore.  And I believe the major labels will continue to have a negative outlook on it until they find a way to regain control. If we’re talking illegal downloads, yes I agree.

7. In a related question how do you feel about fans recording shows and trading them? It’s kind of a double-edged sword I think…because it could benefit the bands that aren’t big enough to market a DVD, or not at the level to where they could benefit monetarily from a DVD. “hey check out this band”…it’s exposure plain and simple.  But when a national band is trying to make money off of a DVD I think it can definitely hurt.

8. If you were a superhero, what music person would be your arch-nemesis and why? Not a big fan of Lars Ulrich, so probably him. (Editors note: Larry is now MY HERO!)

9. If you were to put one together, who would be in your ultimate band? It would be Scott Phillips on drums, Nikki Sixx on bass, Mark Tremonti on guitar, and me out front.

10. What was the last CD you bought? Red – Innocence and Instinct

11. What about the last concert you attended? Crue Fest last summer

12. What has been your biggest Spinal Tap moment? Probably the night Six Hill’s Giant played the Katrina benefit at O’Brian’s.  We had already played and Akacia had taken the stage.  I had sat down on the floor in front of the stage to taunt the big Samoan and all at once everything went dark and what felt like a wet Q-tip was squishing against the back of my head.  Mike Mitchell from Deja Vu was wearing his infamous kilt.  He had put the kilt over my head (while still wearing it) covering my face, and was humping the back of my head.  Scarred for life.

13. Finally, are there any closing thoughts you’d like to get out there? We call this segment SHOUT IT OUT LOUD. I consider myself very fortunate to have either crossed paths with, played music with, got really drunk with, poked fun at, learned from, or made friends with (or all of the above) some of Evansville’s best.  Lee Ramirez, Jim Gaines, Mike Mitchell, Jim Cauley, The Six Hill’s guys, Scott McEllhiney, Ed Sein, Brandon Osborne, all of the guys in Paradigum, Dave Ruckman, John Gauer, Chaz Dicus, the Calling Corners guys, the list goes on and on.  I appreciate all of you guys.