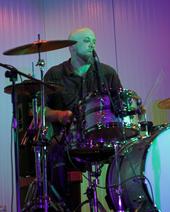 1. Hello Jim and welcome to Kick Acts. Tell us a little bit about yourself.

I am-in the immortal words of Blaine Henry-a “rock-n-roll dinosaur”. I have been playing drums  for @ 23 years. I have 3 daughters-17, 8, and 7. Divorced. I have a wonderful girlfriend. Sales rep for Body Panels Company to pay the bills. I also build, repair and restore drums… overwhelmingly busy with that lately-mostly for myself. I’ve built and repaired drums for many prominent local drummers-and some not-so-local. I like beer.

2. You’re currently in the band called “Hog Maw”. What the hell kind of name is that and what kind of music do you play?

Hog Maw… I have no idea. Jon and Whip would have to answer that question. I’m a late addition to the band, so I’m out of the loop.

Musically-all over the place. A lot of straight blues, some funk-Meters, Neville Brothers-some rock/blues ala Govt. Mule, ZZ Top, Cream, Hendrix-some countryish stuff, and some really eclectic stuff. I’m still being broken in, so there is a lot I’m not aware of yet. A lot of fun, though.

3. You have been around a long time like a lot of us fellow musicians have. Any previous bands or projects you want to mention?

Previous bands…wow. White Hiney (the Ross Theater days), NO!, Other People, Mama Zot, Dizzy and the Superheroes, The Wurms, Velvet Jones, Blue I’d Soul, BSR, Bliss Valve, Fountainhead, Jenn and the Back Seat Drivers, 5-11 Jimmy, Vegas Radio, The Huckleberrys. Currently-Hog Maw, Loko Davi (original rock band with Blaine and Scott from Mama Zot), and Dan Conn. A full plate. I intended on taking a break for @ 6 months when The Huckleberrys called it quits, but I got bored FAST…then I had offers I couldn’t refuse. I love everything I’m doing now, for different reasons.

Greatest gigs-too many to say any one in particular. Opening for Nickelback with BSR, Mother Mesker ’95 with Mama Zot, showcasing for labels/management in Nashville with Dizzy and the Superheroes-BIZARRE gig. The W.C. Handy Fest for several years in a row with The Huckleberrys. A woodworking expo in Madisonville, where teenage Amish boys watched us play like we were on fire. Numerous gigs opening for 9 LB. Hammer in the White Hiney days, and on and on. I’ve had a LOT of fun.

5. How about the worst gig?

Worst gigs…a place called the Top Hat in Newport, Kentucky-what a toilet. A biker rally in Owensboro with Mama Zot in ’95-we almost got killed. Seriously. Blaine Henry named that gig “Hell’s Neck Boogie”. A gig in Bowling Green, Kentucky with Dizzy and the Superheroes-the entire band almost went to jail. Oddly, we were saved by our singer being a disgusting slob-the nasty rotten food scattered about his van kept the police canine from making an incriminating discovery. You know what I  mean, right? Various others that seemed really bad at the time, but in hindsight weren’t that bad actually-sometimes you just take them hard.

6. Do you have any other hobbies other than playing drums? I was told to ask you about a “special” van that has candy dispensers in it.

Hobbies other than drums…mountain biking-but I don’t get to ride much anymore. Video games. About it, actually. As for the candy dispensers in my van-HAHAHA, Snyder! I own 2 vans, actually-one is affectionately known as the “kidnapper”. My girlfriend and I have a running joke-we talk about getting my 2 little girls, and her daughter, to walk down the sidewalk-then we pull up quickly, slide the door open, and scoop them up. Some probably wouldn’t be amused by that-but we laugh until it hurts plotting it out.

7. If you had to pick the greatest drummer of all time who would that be and why?

Greatest drummer…no way I can pick just one. My biggest rock influences would have to be John Bonham, Mitch Mitchell, Ian Paice, Matt Cameron, Abe Laboriel Jr., Mickey Curry, Matt Abts, John Theodore, and Steve White. Bonham would have to be the all-time fave, I guess-the sound of his drums, and his feel. Other drummers I love from various genres-Benny Greb, Keith Carlock, Zigaboo Modeliste, Billy Martin, Tony Williams, Elvin Jones, Ralf Gustke, Steve Jordan…I could go on and on. I also have always said that you can learn something from everyone-even if it’s what not to do. 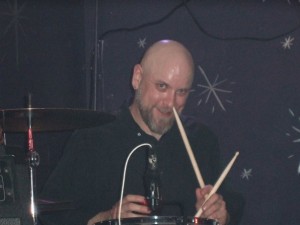 First concert-A TON of local punk rock shows…but the first arena concert I remember seeing was U2 on the Joshua Tree tour, with the Bodeans opening. Great show.

9. What advice would you give someone just starting out playing drums?

Advice to someone just starting to play drums-have fun, listen to what you and others are playing, and PRACTICE. Nothing can beat repetition for building muscle memory, stamina, and a sense of time. Also-listen to all types of music, and drummers. I don’t care if you just want to play jazz, metal, country, etc.-take in what everyone is doing, filter it, and introduce it to your game. Every influence-good or bad-will help you find your style. Play every note like you mean it. Did I mention have fun?

My “shout it out loud”…I’ve been extremely fortunate. I know it’s just Evansville, Indiana – but I’ve been very fortunate to play with pretty much everyone I’ve wanted to play with around this area. there are a lot of great players around here, and a lot of them slip under the radar… recognition-wise. My gratitude to some of the outstanding guitarists I’ve played with – Scott “Mac” McIllhiney, Cooper “Princess” Bell, Jon Snyder (sissy boy), Mike Fisher, Ed “Dirty Sanchez” Sein, Tommy Stillwell, Jeff Ennis, Keith Burden, Mike Gordon, John Adkisson… I’ve learned a lot from all of these guys.

Big props to Kevin for another thing-showing me what it takes to be a pro. Say what you want, love him or hate him-but dude brings it EVERY time he hits the stage. The best advice anyone ever gave me as a player was from Kevin – “You can’t be great every night, but YOU CAN be good every night”.  True.

Last, but not least-my current bands are exactly what I needed at this point in my life…Loko Davi SLAMS, and it feels great to get my rock jones going again. AIM FOR THE FLOOR!!! Better yet, I’m playing with some of my best friends on the planet again in this band-and it feels great to be here.  Hog Maw-I get to push myself stylistically a little, and it’s great. But I still hate shuffles. 🙂 Whip and Larry are two of the nicest guys you’ll ever meet, as well. Jon Snyder…eh. He’s OK, I guess. 🙂 Dan Conn-nice to relax, support the great players surrounding me, and just hold it all down.

Also-I’m happier personally than I’ve been in a long time. Amazing how much easier it is to go day to day when you aren’t pissed at the world. Sounds corny-but I’m really glad to be on this planet right now. I have great friends, great family, and great music. What more do you really need?

The Moon landing was not faked. And even if it was, it’s my Easter Bunny. So leave it alone. 🙂

Tell us about you experince playing with Bob Kulick …

Bob Kulick- Hmmmmm…should I be P.C. here and say he was difficult? Nah…fuck it. He was an ass. ASS. He was hostile to all of us playing (Mike Fisher, Dave Newton, Allen “Fucking” Tate, and myself), condescending, and just generally hateful. Two of the highlights of that gig-Fisher ripping him a new ass, instrumentally-and me playing “Love Gun” MUCH faster than it should be. We played a bit at the soundcheck the night before the gig, and he said I played it too slow-I was playing album tempo. So…when we did the gig, I counted it off FAASSSTTT…and rolled with it. He was obviously struggling with the solo at that speed. He who laughs last…then the sumbitch tried to be all sweet to us after the gig. Ron Keel, on the other hand, was SUPER COOL. Very nice guy. Saw him the day after at the NAMM show-he walked straight to me, and talked to me for @ 20 minutes.

You didn’t mention Peter Criss as one of your main influences, are you mad or just having a brain fart anticipating KISS’S new release on October 6th, by standing in line all night at Joe’s Records and buying it?

Peter Criss… should have listed him as a favorite, I guess. Not a huge fan of his playing anymore-but I was as a kid, and he’s probably the single biggest reason I’m a drummer. So props to Peter. As for KISS’ new release-WTF? Peter won’t be on it. Eric Singer will, though-and he’s a badass. But not enough so for me to purchase this turd of a recording. Besides, Tate’s little troll ass will buy every copy. As for Joe’s Records-I’m not allowed on the property…I refuse to swing from Joe W. Smith’s nutz, and he finds that unacceptable.