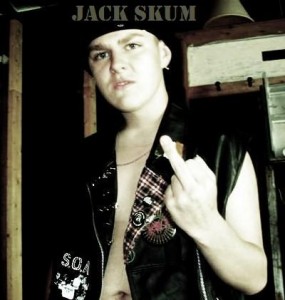 1.Hello Jack, and welcome to Kickacts. Tell us a little bit about yourself.

Well, it’s nice to finally feel welcomed by some type of media group…

Well, I was born in Waukegan, IL, which is a little city north of Chicago. I grew up
on the lake, moving around from place to place almost every 3-6 months from then on
until very recently.

My mom was 19 when she had me and was a teenage runaway. She left her mom’s at 15,
moved to Waukegan and tried doing high school on her own. She dropped out a little
bit after.

My dad was an older man of 35 when he bought that 19 year-old girl a drink or two…
I was born shortly after. My dad is and always has been a drug addict and an overall
psychopath. He beat the shit outta me and my mom as long as I can remember and was
always back and forth with cocaine (crack later) and heroin.

Moved to Chicago at about 6 or 7; parents got divorced about that time too, so I
lived with my mom and grandparents. Got the shit kicked outta me by the neighborhood
kids almost daily because I was one of the last remaining “paler kids” in the area.
White flight was just wrapping up when my family moved there, so it was litterally
me and my family in that town as far as diversity goes…

Learned a lot at that age. No one will fuckin give you a break if they can help it.

Learned quickly that fighting dirty is the best way to go, and that’s a philosophy I
still hold tight in every aspect of my life. Give ’em al both fists the minute they
look the other way, and that’s saved my life a few times.

At about 10, I moved in with my Dad in a little trailer park just south of Kenosha,
Wisconsin. A few years of hell came there, but I won’t get too personal.

Dad taught me to drink, smoke and do whatever dope I could find. Showed me how to
shoot, survive and live on the street. We were homeless for quite a while, but me
and my dad had a relationship that we had never known before. We were comrades;
partners in crime.

Dad showed me how to ripoff dealers, steal, rob, lie and do whatever I needed to
survive. He told me that you should do whatever you can to survive, because you can
move away and have a clean slate, but you can’t ever pull a bullet outta your
head…

We shared dope, we lived wherever, together, etc….

This is about the same time I found punk rock. I was homeless in the Milwaukee area
and I knew this guy named Brandon. He was a real fuckin’ gutter punk, like the kinda
shit from Suburbia. We used to spend Friday-Sunday panhandling for beer money then
going to punk shows in the city, either Milwaukee or Chicago. I guess I can say I’ve
been in punk rock almost 5 years now and I knew/know a lotta the “people to know”
at least in certain scenes…

Made a lot of friends then, but I had  a father-related drug problem too. That ended
in a hospitalization from a near death heroin OD. I spent 2 months in the mental
institution and then went right back too shooting with new found precision.

Dad kicked me out and I moved back to the grandparents house in Chicago. They kicked
me out a week later because of my lifestyle and mood swings with the withdrawl.

Lived in Gary, IN; moved to KY.

Found my first band here, stabbed the fuck outta my (now former) stepdad, got off on
that without a charge, got busted with dope, built more shit on my record, etc…

Overall, this has been an interesting place….

2.You go by “Jack Skum”, obvisously that’s not on your birth certificate
so how did you come up with the cool name? You use a Wigi board or toss
cat bones and read them?

Jackson is my first name, Scum is the most approapriate adjective I found to
describe myself.

3.You have a band that goes by the name “Cheap Smokes”. Tell us who is in 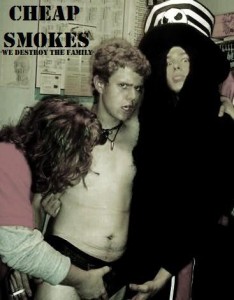 the band, were we can find you on the web at and what type of music you guys play.

Currently, it’s me on vox, JLeeWoo on lead 6’er, Dirt West on rythem and Don the
Image on skins.

We’ve had a guy named Mike on rythem, a guy called the Messiah on lead (he was our
original), Malcolm “The Bass Bitch” Storm playing the 4’s, Pheeb on Trumpet and
Burnt Cookie on Drums

You can find us on the web at www.myspace.com/cheapsmokesforyou

We play a more extreme style of punk, commonly known as scumrock or scumbag
rock’n’roll. More extreme lyrics, sounds and imagery than most punk. We’re like the
outcasts of the punk scene; we do things that even most punks consider offensive or
wrong.

4.You guys basically are at or all under 21. Which tells me you missed the
whole grunge era back in the early 90’s. At that time punk was also as
dead as Kurt Cobain was by 1995. So what turned you on to punk music and
the lifestyle? “Green Day”? I mean they haven’t been punk since their
“Dookie” album.

I can’t quite put my finger on what grabbed me into punk back then… I was a huge fan
of a lot of underground bands in the Thrash scene before I discovered punk.

I’ve just always hated the sugercoated shit that was applauded by the general
public. I wanted music that spoke to me. I was tired of seeing rich-boy peices of
shit on TV with other people writing their generic, shitty music. That’s about the
time I met Brandon. The first punk band I ever listened too was Black Flag. He had
had the “Six Pack” LP on original vinyl. We listened to it and I felt complete.
Poor, disillusioned musicians playing simple music with a sound that was more raw
and powerful than anything I’d ever heard.

I discovered punk rock at the perfect time in my life for punk to work, too. I was
homeless on and off and addicted to drugs. What better time is there to say No
Future?

5.Who do you get your inspiration from?

6. What do you think about the godfathers of punk. The Clash, The Sex
Pistols, and Blondie to name a few…Do you think they still “fight the
fight” of the movement (well those that are still alive)…or did they all
eventually conform to society and sell out?

In my mind the “Big 4” godfathers in punk sound and aesthetics are The Sex Pistols,

The C(l)ash, The Germs and The Subhumans.

As far as selling out, Johnny Rotten makes butter commercials and reality shows.

The Clash, well…they didn’t wait long…
Darby died and thus the (real) Germs had no chance to sell out…

Subhumans, thankfully, never lowered themselves to that.

The Subhumans are a thinkingman’s punk band and have been raising awareness and
opening young minds to new idea for over 20 years. And they don’t make near 6
figures on t-shirts like certain Cuban revolutionaries who were known for doing
something similar….

In truth, most bands have a price. It’s fucking sad, but if you’ve heard of them,
they sold out somewhere… 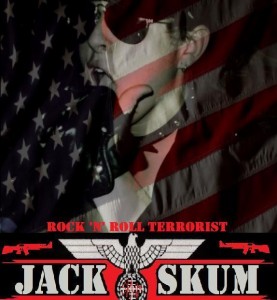 7. Do you have a great gig story to share with us?

Great gig…. there have been a lot of them..I rate one by what I remember and how
hard it is for me to remember the rest.

As far as gigs I’ve been to, the one in Hendo that me, Don, Adam from Throat and a
bunch of people from Nashville were at. We played a little game called “Torment to
Mall-kids” and spent the night causing the little emo fucks to suffer. We went back
and forth trying to disgust them at one point, and I won by a long shot.

Me and Cory both pissed in a water bottle in the middle of the crowd, then I drank
most of the piss and poured the rest on my head. I then vomited (another girl had as
soon as she saw this all), rolled in the puke, ate it and went around jumping on
dudes and chicks and jamming my pissy-pukey tongue down their throats.

Best show I played was also in Hendo, on Halloween of ’08. We played a basement show
at a fuckin methhouse…

I was already rip-roaring drunk when we got there and drank more there. All I really
remember is wearing some chicks panties, taking them off, jerking my dick and then
getting chased out by a guy trying to stab me to death. All while singing.

Nashville was always good. I always get nicely drunk, bloody and nuts there…

We’ve played a million fuckin’ no-crowders… Our first few were the worst, for
sure.

Worst I’ve ever been to was my only stadium type show. I saw the Slayer-Manson tour
in Milwaukee… Needless to say that any show where Slayer opens for that faggot is
going to be a bust…

9. What are Jack’s plans in life? Gonna give the music thing your full
attention or do you have other ambitions too?

Music will always be in my life, but I do other art as well. Looking into filmaking
now…

I want a career in art, no matter what it takes. I will not settle for anything
less than being my own boss and creating as a means of income. I can “survive” like
I said until I have that.

WHEN A MAN WAKES UP AND PUTS ON THE CLOTHES HE WANTS, HE LIES TO HIMSELF AND SAYS HE
CAN DO IT BECAUSE HE IS FREE; YET IF HE, WEARING THOSE SAME CLOTHES, KILLED ANOTHER
MAN, OR BROKE ANY LAW FOR THAT MATTER, WOULD REMEMBER THAT HE LIED THIS MORNING.

DON’T KID YOURSELF INTO THINKING “PUNK ROCK” IS ABOUT FREEDOM. IT’S NOT, NOR IS ANY
CULTURE. FREEDOM IS ABOUT BEING AND DOING WHAT YOU WANT, REGARDLESS OF THE PENALTY.

What are you guys doing to get your name out there? Is it strictly by word of mouth or something else.

We’re working on a DVD now, but promotions are always up in the air…

And..
If you could talk to one person in History, who would it be and why?

Too many. I won’t even touch this one…

Albert Fish-Early serial killer/cannibal/sado-masochist. Nothing like him
during his time.
GG Allin-Major influence on philosophy and music

Jesus-Best known philosopher, “Son of God”, like to get his actual opinion

The Unibomber-Believed strongly in what he did, not incompitent, killed
many

What’s the difference between “punk” music and a punk kid…not a kid
thats into “punk” music with the “punk” look but but just a general
punkass kid that gets into trouble all the time and not into punk
music…make sense?

Ha, not much depending on who the example is

I got a possession charge, assault charge and two CCDWs (concealed deadly) on me, so
I guess I’m a punkass! 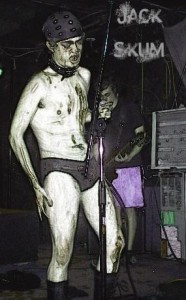