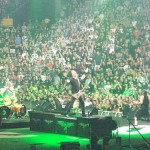 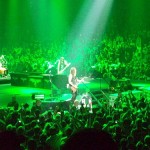 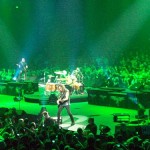 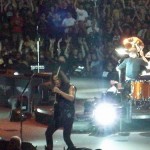 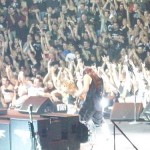 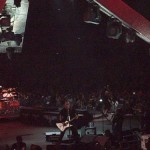 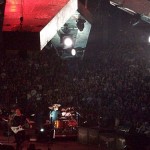 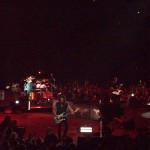 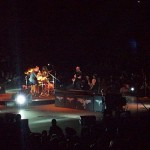 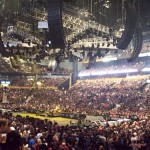 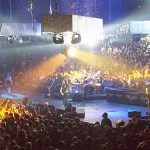 We took another road  trip to Nashville again this week to check out Metallica. Hey, that’s two trips in two weeks to attend concerts down there. That doesn’t say much for Evansville now does it? So my son and daughter, her husband Zack and his friend Tater (long story) headed off this past Monday for some serious R&R. (Rock and Roll you mofos).
We get to the Summit and the place is packed. We bought our tickets about six months ago and the show sold out the day they went on sale. So , for all you Metallica haters that say they have sold out, to quote them, “We sold out, We sell out where ever we go”..Well, there you go… We get in the arena and the first band is already playing. They started at 7pm on the dot… They were “Gojira ” from France. I don’t know much about them and really wasn’t impressed with the band but they were excited as hell to be opening for Metallica and I got to add who wouldn’t be. The singer kept telling the audience every few minutes how fucking great it was and a dream come true to be there. Once again, I would be too 🙂

Next band up was “Lamb of God”. Typical emo screaming band but they put on a good show. Their normal guitar player couldn’t make the show for some personal reasons so they had the guitar player from “God Forbid” to sit in with them. Once again, they weren’t bad, just not my type of music. The singer/screamer mainly ran around giving props to Hank Williams Sr. and pouring bottles of water over his own head and throwing the bottles out into the audience.

After the two opening acts were over it was Metallica time!!. I had never seen these guys before. Well, to clear that up, I had tickets to see them on their “Master of Puppets” tour when they opened for Ozzy back in the day but one of the guy’s in Metallica was skateboarding backstage and fractured his wrist and had to cancel the show at the last minute. So when the house lights went down in Nashville Monday night  it was a thunderous roar coming from the crowd!! This was Metallica’s first night on this American leg of their tour. They had huge light rigs that were shaped like coffins and the cool 360 degree stage so no one in the house had a bad seat. Speaking of bad seats, don’t get me started… I would like to attend at least one concert where the guy that gets the seat next to me isn’t over 400+ pounds and has to  pour himself into his seat and half of mine. I had to sit sideways during the first two bands and I just stood the whole time during Metallica’s set. This guy’s huge legs where taking up half my area of my seat. I know he couldnt help it but damn…… If America keeps growing, they will need to redesign stadium seating to accomadate extremely large people. But back to the show!! Man, what a show!!! These guys kicked major ass!!! From the word “GO”, it was on. They opened with ‘That was Just your Life” from their brand new Album “Death Magnet”. Followed by “The End of the Line” and then on to “Creeping death”. The show was none stop action. The huge coffin lights were moving in and out of the set and Metallica had a laser light show to boot!! They played well over two hours!! About the only let down I had during the show was they played “Turn the Page” and I think it broke some of their momentum but they quickly picked it back up. They even had a guest show up and play with them. It was “Lemmy” from “Motorhead”. He played two songs from his band MotorHead with them. One funny thing happened while Lemmy was playing was that he was using a guitar cable instead of being wireless and he walked past the length of his guitar cable and it pulled out!! A roadie quickly scrammbled and retrieved it and plugged it back up!!

They played alot of their radio hits  and some obscure stuff  to satify the crowd. James was real cool with the young metal head kids there too. He pointed to a few of them on front roll and asked their ages and they were like 8, 10, and 11. He said they must have cool parents because he couldn’t go to concerts until he was 15.

I give this show 8 “Ride the Lightnings” out of 10 since they didn’t play “Fade to Black” or “From Whom the Bell Tolls”.