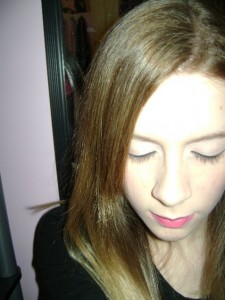 1. Katie, welcome to KickActs.com. Tell everyone a little bit about yourself.

Well, I am a junior at Henderson County High School. I’ve lived in Henderson since December of 2000. I was born in Fort Worth, Texas. I’ve pretty much had music surrounding me my entire life. My dad’s parents are both
professional musicians and are still playing. My grandmother, Evalyn Champion, has always been there to help me with music and with my vocal training. She’s really taught me a lot. My dad has really helped me a lot
with guitar and with my repertoire. He is always bringing me new music to listen to or to learn. I have inherited the weirdest music library from him. One minute, Radiohead will be playing, the next Jimmy Page and the Black Crows, then Eva Cassidy, then Richard Thompson, then Lyle Lovett. It’s really crazy but I love it!

2. You perform frequently at En El Rio’s in Henderson Kentucky. How has the crowd there responded to you?

I feel like they have responded okay. They’re a fairly regular crowd. I feel
comfortable trying new songs out on them. Recently I sang “Ain’t No Rest For
The Wicked” by Cage the Elephant and a woman came up to me afterwards and
said “Oh I really loved that Ani D’Franco song you did! I’m a huge fan of
hers!” I just smiled and said “I didn’t play any Ani D’Franco.” She was
astonished. It was kind of funny. Some of the stuff I really like playing
doesn’t really fly there, like “Like a Star” by Corrine Bailey Rae. But I’ve
definitely gotten a feel for what’ll fly and what won’t.

3. You have also performed in Nashville. How did that go and what was it
like singing in the Country Music Capitol of the world? Did you meet anyone
famous while you were there?

I actually haven’t performed in Nashville yet. (oops, my bad, I thought your Dad said you did…editor)I’m currently working with Dad on some originals to take down there to the Songwriter’s Night. I’m excited to get down there! Dad has played there and I think he actually saw Taylor Swift before she was famous!

4.Who are you musical heroes and why?

Oh gosh… there’s just so many! I’d have to say my top few are Sheryl Crow,
Bonnie Raitt, Chrissie Hynde from the Pretenders, Adele, and The Greencards
because they all have really unique music. They have all found a niche that
they can all take full liberty with. They’re all hard to categorize because
they really don’t fit with the cliché’s of the genres they’re thrown into.
The Greencards are actually a bluegrass band but you would never guess it
listening to or looking at them. They’re from Europe and Australia and they
look like kind of artsy, indie people and their music is kind of like that
too. They use the usual bluegrass instruments: guitar, banjo, mandolin, ect.
But in different ways. Definitely check them out if you haven’t!

Another musical hero of mine is Lyle Lovett. He is a true lyricist. His
songs tell stories. He’s a great example of good old Texas country music.
Sometimes he makes me really homesick!

5. What are your ambitions? Is music just a hobby or you really pursuing it
with everything you got?

Music is something I always want to have with me. I would really like to see
my musical career take off but if it doesn’t, I plan on going to college.
I’m not sure what I’ll major in but I’ve got some ideas! It’s a toss right
now between going into the film industry as a Music Director (as in the
person who picks the music, not who necessarily writes it), Music Therapy,
or Psychology.

6. What is your musical background? Are you self-taught or did you take
lessons?

Again, I’ve grown up surrounded my music. I learn a lot on my own but
sometimes I have to ask my grandmother or my dad for help. And of course,
they’re always right there to teach me!

7. What are your thoughts about people that perform singing to CD’s that
still have the main vocals on it. Do you think that takes away from their
performance? I mean, do you think it hides their voice too much?

I think it’s pretty lame. You can’t hear their voice. When you’re in your
car singing with the radio, it’s cool. But if you’re gonna sing karaoke or
with a CD, go to a karaoke night, not an open mic night. I feel like the
real musicians who get up there after someone singing with a track have to
work hard to gain the audience’s attention back. I have definitely
experienced that. After hearing Hannah Montana or whatever, they don’t care
what’s going on onstage.

8. What do you think of professional performers like Britney Spears and others like her that lip-sync to pre-recorded vocal tracks during their concerts and not sing? Do you think it cheats the audience?

I think in some situations it does. In televised outdoor concerts, i.e. the Macy’s Day Parade, it’s really a must to prevent major botches. But in a concert setting it’s not acceptable. If you mess up, it’s obvious that you’re lip-syncing and it makes you look really bad.

9. If you could go out on tour with anyone, who would it be and why?

Oh gosh! That’s a tough question! I would say either Sheryl Crow or The Greencards. Just because they’re my favorites!

Well there’s a really exciting event that I’ll be a part of coming up pretty soon in Henderson County. It’s called “Terror on the Trail.” It’s a haunted trail out in the Robards/Niagara area that is a charity event. It’ll be October 23rd and 24th. On the 24th we will be participating in “Thrill the World.” “Thrill the World” is a global tribute to Michael Jackson in which groups all around the world will simultaneously do the Thriller dance! Every participants name will be in the Guinness World Records book. (If we break the record!)

Your dad is in the music business too and you guys perform together. Has he you warned you about all the pitfalls in this crazy business and do you ever refer to him as “Robert Stewart” or “Billy Ray Cyrus”? 😛

Hahaha I don’t call him either of those names but he has warned me about the risks of not being that one in a million. I also act and I’ve experienced not getting the role I wanted or a role at all and I know that music will be pretty much the same. But I have confidence in myself and I try not to stress over it too much! 🙂

(and check out the videos below!! (KA)