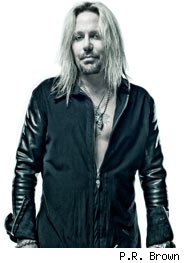 Heather Muse from Lemondrop.com spoke with MÖTLEY CRÜE singer Vince Neil recently about a number of topics. A few excerpts from the chat follow:

Lemondrop.com: Is the movie version of The Dirt ever going to get made?

Neil: “I guess it’s just sitting on somebody’s desk right now collecting dust. It’s always been out of our hands. So if it happens, it’s great. If it doesn’t, [laughs] I’m not going to sit around and wait for the trailer to come out, you know. One thing about [the movie], I never even agreed that the movie should be made because how can you really put those lives – our lives and the stuff that we’ve done – into a two-hour film? There’s so much stuff. What do you leave out? What do you put in, and how do you actually capture it on film without it being rated X, really, because of all the excesses: girls and drugs and drinking and all that stuff? I’d rather you leave it to your imagination and picture it in your mind when you read the book. To me, that’s cooler.”

Neil: “It’s looser. It’s a lot of fun because it’s not so structured … But my band, we just go out and we don’t have a set list or anything.

We just go out that night and we sit down and we go, ‘Well, what do we want to play tonight?’ And we throw down some songs and just go and play. It’s everything from tons of cool cover songs and classic Mötley stuff and stuff from solo records and everything in between. You can’t do that in Mötley. I just go out and have a lot of fun. It’s fun being in Mötley, but this is a lot of fun too. I enjoy playing the smaller places too. You never get a chance to do that in a band like Mötley Crüe. So I get kind of the best of both worlds.”