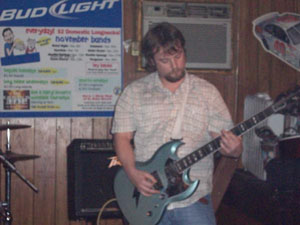 1. Tell the readers a little bit about yourself and your musical background. I’ve lived in Evansville basically all of my life. I’ve been playing music since I was around about 18 so that puts me as having been doing it 18 years or so or half my life. All the while I wasn’t actively involved in bands but I have been playing guitar pretty much for that given length of time.

2. How did you come up with the band name? Actually a friend of mine, Nick Faulkner, who plays in a band called Diversion came up with it. We’re all good with it so hopefully it sticks around awhile.

3. Who are the members of the band and who plays which instrument? Danny McLaughlin plays bass, Brandon Grisham drums, a new member V.J. is up on the mic. I’m the guy on guitar in the background. 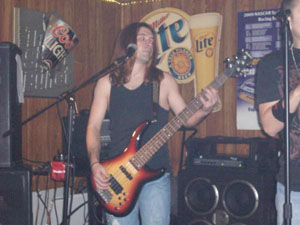 4. What kind of gear does each of you use? I’m not observant enough to do this question justice but here goes. I happen to use a gibson sg and a peavey bandit amp, run through a digitech. Brandon plays on a Gretch kit, Danny has a Fender 5-string… Not alot of exciting details to further add unfortunately.

5. Do you do cover tunes, original tunes, or both? We are all cover as of now but who’s to say what’s down the road. Maybe an original will come together and we’ll throw it in the set.

6. Who are some of your influences, muscial or otherwise? Definitely a lot of the usual Guitar Heroes like Hendrix, David Gilmour, Jimmy Page, James Hetfield, Buzz Osborne, Cobain, Jim Heath, and so on. 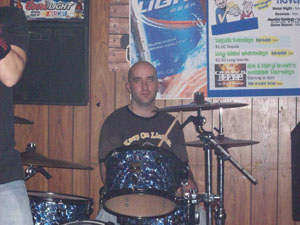 7. Tell us about some of the greatest and worst gigs you’ve experienced. Probably Chowder Monkey’s first gig was one of my favorites. After all of the practice we put in I still felt unsure going into our first gig. After a few songs, everything just felt like it couldn’t go wrong and that was nice. — I played at an old joint called Funky’s once with a band called Can of Bliss. I remember feeling good about that. — My worst gig is a story I keep buried in the past lol but it invloved being passed out moments before hitting the stage.

8. Tell us about your impressions of the local music scene. What do you think could be done to improve it? Definitely more bands not afraid to do their own thing whether it’s cover choices or originals. Lately I’ve seen some really good bands though that have got me interested. Star Pupil and Hostile Apology are some to name a few. 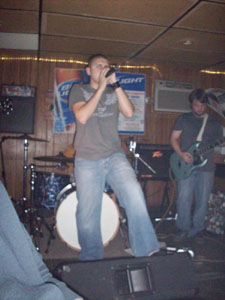 9. What do the members of this band do when they’re not rehearsing or gigging? Obviously working and maintaning family lives. Going out and weekends. I really don’t know if anyone has any hobbies worth mentioning. I also happen to have a side acoustic act called The Last Hurrahs.

10. This one really isn’t a question. This is the part of the interview where we ask you to say what’s on your mind or to give a shout out to whomever you want. On my mind: cant wait to see this in Kick Acts! Well that’s cheesy but didn’t want to leave it blank.