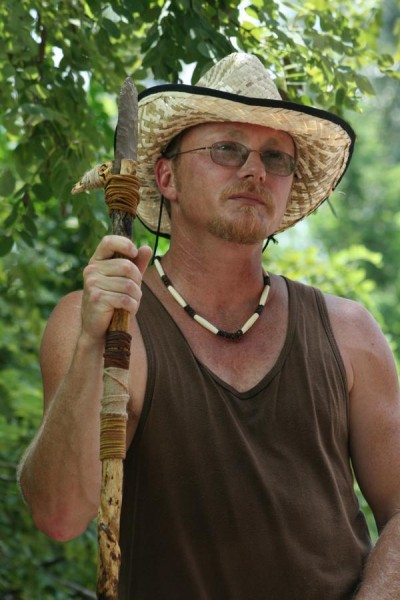 There is a place in Smith Mills, Henderson County, Kentucky called Burbank’s Lake,
also known locally as ‘Spook Hill’. As you might guess by the name, down through the
years this particular spot has garnered a reputation for being haunted. Many
inexplicable experiences have taken place in this area, including various cryptid
sightings such as Bigfoot, water monsters, giant birds and black panthers. UFO
activity as well is not uncommon here, and there are many local ghost stories
associated with Spook Hill. Paranormal researchers and investigators commonly refer
to locations such as these as “window areas,” where multiple seemingly unrelated
phenomena tend to overlap repeatedly. Lending to the aura of mystery that surrounds
Spook Hill is the fact that there are 2 very old cemeteries, long since reclaimed by
the forest, to be found at the hilltops.

Also situated there between the family cemetery and the slave cemetery, are three
ancient lakes. One is fairly large and deep and all were rumored for as long as I
could remember to contain monster bass. The male members of my family have always
been avid fishermen and outdoors men, so one day back in the summer of 1987 we had
all decided to go and fish Burbank’s Lake. This was totally against our dad’s better
judgment, mind you. He had lived near the area when he was younger and had been
personally warned by Mr. Burbank never to let night catch him on the property. He
never said why, and dad didn’t ask. Also, my older half-brother, Harold, had told us
a scary story about a time when he and a brother-in-law had went night-fishing there
in a boat some ten years before. He claimed that every time the two tried to land
the boat and come ashore to leave, the woods would erupt with the sound of breaking
branches and heavy footsteps forcing them to shove back out into the lake. ” It
sounded like a herd of elephants was trompin’ around in there,” he had said. Every
attempt to leave the lake was met by this resistance, which frightened them both,
and they were forced to spend the entire night in the boat out in the middle of the
lake. Only when dawn broke were the two ‘allowed’ to leave Burbank’s Lake, which
they did in all haste.

This account intrigued me to no end, green as I was back then, but the lure of
trophy bass enticed us all. So, youthfully throwing caution to the wind, we headed
out. We arrived at the lake in that afternoon and walked through the trees a short
distance down to the water. We had been able to procure a one man bass boat with a
small trolling motor from a friend. It could hold two people – but just barely. As
there were six of us, four brothers and two friends, this meant that four would be
confined to fishing from the banks. We found the place to be absolutely teeming with
water moccasins and not one of us had brought a weapon of any type, only fishing
poles. Since everyone wanted to fish the other side of the lake we opted to be
ferried across one by one rather than walking around through the tall grass and
thick brush, trying to avoid probable snake bite. It took forever for the little
motor to chug everyone across the lake. By the time we made it to the other side it
was already late afternoon, the sun was making a rapid descent through the trees. We
fished awhile without much luck. I remember catching one large mouth that weighed a
couple of pounds and, before we knew it, darkness was fast approaching.

My older brother, who had been hogging the bass boat with a family friend, finally
sputtered in to shore and began taking everyone back across one at a time. This took
about 30-40 minutes round trip, with five trips to be made. When complete darkness
had finally fallen, just myself and one of my younger brothers remained on the far
side of the lake. Luckily, we had brought with us half a gallon of kerosene and had
earlier gathered what wood we could find, which was mostly wet since it had rained
there a couple of days previously, and used it to build a small fire. We were
sitting there bemoaning so little reward for so much trouble and effort, when the
sound of breaking branches and heavy footsteps erupted from the darkness of the
woods in front of us. It was a terrifyingly loud commotion and we jumped up in
fright. I have never before or since, been so terrified by any type of sound. It
was, looking back, totally unlike us to react in such a manner. Perhaps it was
because, at the first limb fracture, we both knew immediately what was out there in
those haunted woods. Somehow, we knew that the same creatures that we had
encountered as young children back in 1975 were out there in the darkness. A feeling
such as this is never forgotten, I assure you. Worse still, the sounds soon began to
come from behind us and to our right as well, and they were getting closer. We heard
no grunts; no growls; no breathing. Just the heavy footfalls and the terrific
explosions of breaking tree limbs all around us. We thought we were both going to
die that night, without a doubt, and I still count myself and my brother lucky to
have made it out of there alive.

We could see nothing as it was quite dark, and the fire was pitifully small. There
was no moon and heavy cloud cover. When the sounds got quite close I threw some
kerosene onto the fire, determined to at least see what was about to eat us. The
fuel ignited and the fire flared up, illuminating an area of about 25 radial feet in
all directions. We saw nothing. The light would only last for couple of seconds,
then it would diminish again, plunging our surroundings back into nearly utter
darkness. As soon as this happened the sounds would start up and begin to approach
us. Over and over I waited until the sounds got to within ten feet or so then threw
the fuel into the shrinking fire, washing the woods in sudden firelight. Every time
I did this all the sounds immediately stopped, only to start again when the light
was gone. We never did see a thing. Not even a single eye-shine. And the kerosene
didn’t last too long.

We had been yelling and making a good sized noise of our own, but whatever it was
that made the sounds refused to be intimidated at all. It seemed that only the
firelight was holding our would be attackers at bay. But the fire was fading fast
and the fuel was spent and the smaller the light became the closer the ungodly
racket approached. Soon only a tiny flame at one end of a small, wet branch remained
of our fire- and the noises were closing in once again. I grabbed the small burning
twig and held it up in front of me as we walked backwards down toward the water’s
edge, the only direction not blocked by the invisible creatures. My mind was reeling
from the turn of events, from the very real possibility that we might not make it
out of this one alive. I was sure that I could make it to the other side of the
lake. It was only about a fifteen minute swim at full throttle, I gauged. But my
brother was not as strong a swimmer as I was, and if he faltered I knew that it
would be up to me to see him to the other side safely. We made it down to the edge
of the lake, the water seemed black as pitch in the darkness. I told him to get
ready to swim for his life, but it was a needless command. He was as ready as I was.
The noises followed us down to the lake without abating at all, amazingly, even
though this area had very few trees! It sounded like invisible branches were being
broken by invisible beings. I could see no movement at all save our own. Luckily for
us, just as we were about to get wet, we heard the sound of our brother on the boat
shouting his approach, and at this the noises finally stopped. We yelled for him to
hurry the hell up. When he reached us we were in a state of agitation, to say the
least. He wanted to know why we had been shouting – and who was next. To put it
simply, we found out a one man boat can actually carry three people in an emergency.