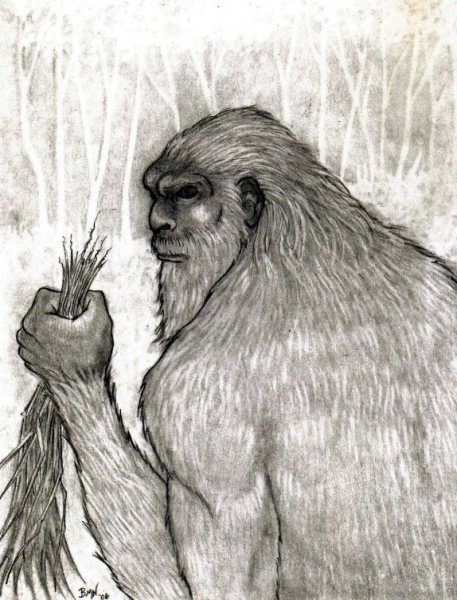 After nearly a year of gathering information and acquiring contacts I was finally
able to investigate rumors that large, hair-covered, bi-pedal monsters were still
being seen in Hebbardsville, Ky. HENDERSON County, just across the mysterious Green
River from Reed and Spottsville, Ky.- about which much has been written by myself. I
had learned that, in early winter 2004, two stargazers were parked on Negro Hill,
located on Pleasant Hill Rd overlooking the Green River bottom lands, when they
spotted two figures in the field below them pulling up old corn stalks and
apparently eating the roots. The creatures were large, apelike and hirsute, one
having brown hair and the other white. Returning to the scene the following morning
signs of the beings presence, in the form of uprooted corn and tracks, were
reportedly found. The creatures were dubbed ‘The Hebbardsville Hillbillies’ by the
locals and the press. I also learned that there was an old abandoned house in the
area where something had reportedly constructed a mighty strange bed out of grass
and sticks. Although I was warned by a local journalist that a fugitive from justice
had been apprehended in this same house a couple years previously, and it was
possible that this man had made the bedding himself, I was determined to see it
personally and decide for myself the nature of its construction. If it still
existed. However, since the source of the information did not reveal the identities
of the alleged witnesses, finding any information at all regarding the incident
proved to be a daunting task in itself.

As luck would have it, I ran into an old acquaintance of mine, Greg Tackett, one
time Hebbardsville resident, who claimed to know the story and locations well and
agreed to lead me to them at my convenience. I had also recently been in contact
with an old Cherokee gentleman, a Mr. M. F., who wishes to remain anonymous (real
name on file), who claimed to have seen these creatures countless times in the
Hebbardsville area since the 1960’s and could provide much detail about their
appearance and behavior. Among other claims. I decided to try and kill two birds
with one stone, so to speak, and both explore the 2004 sighting location and
interview this fellow in the same weekend.

Sat., Dec 16th, 2006 was mild. I had made an appointment to meet Greg and explore
the locations mentioned in the Hillbilly sighting, including the house where the
strange bedding was found. I pulled into his drive at mile marker number five just
as he was pulling out. He is a plumber by trade and had received an urgent service
call. He apologized and asked to postpone the adventure until the following day,
which was fine by me. I had scheduled an interview with M.F. for 2pm that Sunday to
record his testimony, do a sketch of the creatures he claimed to have witnessed so
many times and photograph the tooth and the location on which it was found if
possible. I told Greg that I would return around 11 a.m. the following day. He
promised to be ready. Instead of returning home I decided to go ahead and drive the
15 or 20 miles to Hebbardsville, and do some reconnoitering of the Pleasant Hill
area. Moreover, Greg had informed me that the lady who ran a small country store in
Hebbardsville had a copy of the original newspaper article concerning the
‘Hebbardsville Hillbillies’ in her possession. According to him, she had this
article displayed on the front counter for many months for everyone to see and had
only fairly recently taken it down. She was a very nice, friendly woman, he informed
me, and was sure that she would show it to me if asked. I had never seen or been
able to read the original article. Due to work schedules and time constraints I had
as yet been unable to conduct a micro-fiche search at the local library.

Twenty minutes later I parked my truck beside the store and walked in. Several
people, mostly local farmers, were milling about the store or eating lunch at the
tables in back. A young mother and her 2 children were standing at the counter
behind which two older ladies were busying themselves frying burgers and ringing up
customers. I grabbed a coke and got in line. When I approached the counter I smiled
and ordered a cheeseburger with pickle, onions and mustard. “The burger’ll be a few
minutes,” she said.

As she took my money I asked if she was the owner. She replied affirmatively with
what sounded like a little suspicion in her voice and I got the feeling that this
would not go well for me. Nevertheless, I informed her that I was a local writer,
come to investigate the Hillbilly sightings.

“Do you know anything about that?”, I asked. “Sure don’t.” she replied. “Don’t know
nothin’ about that.”

“Really? A friend of mine told me you had a write-up from the newspaper. Said you
had it taped to this very counter for a long time. That true? Do you have the
article?”

“Sure don’t.” she nervously replied and I could tell immediately that this ‘nice,
friendly’ woman was lying to me. Usually people love to talk and, more often than
not, will if given half a chance, and there’s no better place in the world than a
small town country store if tales are what you’re looking for. Unless you’re an
outsider. Though I was born and had spent nearly my entire life right there in
Henderson county, she had never seen me before and viewed me with obvious distrust.
I couldn’t really blame her for it either. It was just the way of things here.

“Look…All I know is that happened years and years ago on Pleasant Hill road. And
there ain’t been nothin’ like that goin’ on ‘round here lately.”

I noticed a couple ‘good ol’ boys’ eying me from the back. The next couple of
minutes passed uncomfortably and quietly. Then I took my lunch, thanked her and
walked out.

I found Pleasant Hill Rd. to be hilly and heavily wooded mostly, especially as I
drove closer to the river. Bisecting the area was a large swath of land that a local
logging/mining company had reduced to pasture by removing the trees and mining for
coal, turning great tracts of this virgin wilderness into bleak, treeless
meadowland. Despite this there was still hill after rolling hill of densely forested
woodland to be seen with small, gently running creaks which snaked their way through
every few yards it seemed. Even the tracts of second growth timber were fairly
dense.

I drove to the end of the road and pulled into the lot of the old African American
church that stood on the ridge overlooking the Green river. Gazing out the
windshield at the lowlands of Ash Flats I ate my lunch. I was disappointed at my
inability at getting the store owner to speak with me regarding the Hillbilly
sightings, or even to let me see the newspaper article, but I still had high hopes
that my luck would improve by the following day. The sun was high and bright and I
was loath to go home but I knew that there was little I could do without my guide,
other than wander around aimlessly in the woods, so I started the truck and headed
out.

Sunday, the 17th was slightly overcast as I got into my 4 wheel drive and headed
East again. It was already unseasonably warm, with forecasted temps reaching into
the 70’s. True to his word, Greg was ready and eager for the undertaking and I owe
him a huge debt of gratitude for agreeing to help on this venture. Shortly afterward
we headed out, pointing the truck towards the steadily climbing sun and the
Hebbardsville river bottoms. We would have to take the long way around, Greg said,
and come up to the hill from below through the field where the initial sightings had
occurred. The location of the old house site, said to be situated back in the woods
at the end of ‘Book Lane’, was owned by the logging/mining company and allowed no
trespassers. If we were caught on this land chances were good that it would not end
well for us. Fortunately, we both felt that some things were worth risking in the
quest for answers to mysteries of this nature.

We found the lane and drove on but the dirt road soon turned into a muddy ruin two
feet deep, and we realized that the only way to continue now was on foot. I stopped
the vehicle in the middle of the road. It was a very isolated location and there was
no chance of passers by spotting the truck from the main road. We were both
confidant that we could get in and out without being noticed. A short while later I
was standing in the field where the two creatures were seen feeding on the corn
stalk roots. I looked up at the old church, situated high on the wooded ridge above
me and took a few pictures. We walked for another hour through the mud but, when we
approached the intended spot, there was nothing to see but level ground, the old
house which contained the nest had fallen victim to the areas logging activities. I
had arrived months too late to see and photograph the alleged bigfoot nesting site.
Though I was disappointed it was just as well. My camera had inexplicably
malfunctioned as we approached an outlying shed and I was unable to take pictures
for a time, although nothing unusual was noted by either of us. We made the return
trip as rapidly as possible. The day was wearing on and I had other business to
attend to in in the tiny town of Hebbardsville.