WELCOME BACK CHET, ABOUT FUCKING TIME!! 🙂 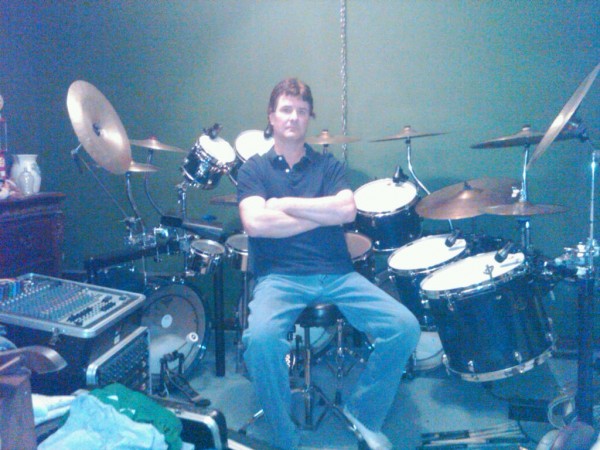 1. Hello Chet and welcome to Kickacts. Were the hell have you been hiding
all these years, Tijuana ?

I have been around, just not as prominent as I used to be. You have to sit
backevery once in a while and let someone else have the spotlight. Otherwise,
people will really get sick of you.

2.Rumor has it you are putting “Chet and the Molesters” back together. Is
it true and how did this come about?

Yes this is true. Nick has been after me and Kevin for the last few years,
and me and Kev have finally sowed up some old and stupid wounds. I like to refer
to them as “Non lucrative decisions”.

3.You guys used to own the Evansville music scene and played everywhere
including as an ”opening act” on some major tour bills that came through.
Is that the game plan this time around?

God only knows what the plan is this time. I just want to have some fun
with it, and be able to play some of the good stuff again. Me and Kevin have a
chemistry that can not be explained. He makes me a better player. Plus Nick has always been like a
brother to me, and Jimmie is a blast on stage. He can hold you attention all night.

4.How in the hell did you get Kevin Book back in the fold? He seems to be
doing the BSR thing pretty regularly.

Like I said earlier, we kissed and made up. He used his tongue though…it gave me a
boner. He is still going to be doing his BSR thing. We will just all be juggling the
schedules around.

5.Want to walk down memory lane? Tell us about your first real gig in a
band many years ago.

My first professional gig was at a place on the corner of Main Street and
Franklin with Gene Baker and Keith Burden. I can not remember the name of it right
now.”Gene Baker and the Undertakers”. We had to play on a balcony where there was
not enough height to stand up all of the way. It was fine for me because I sit when I play.
They however had a hell of a time with it. I laughed all night. I was 15
years old at the time.

6.What got you started playing music and who are your heroes?

I started playing steel guitar at about the age of 7 or 8. Then I started on
electric guitar. The band teacher at Hebron grade school at the time I was
in 5th grade, Bruce Langford, thought I would be good at drums, so I took up
playing the drums. It came really easy for me. Too easy. So I gave up on the guitars, and
focused on the drums. I still pick one up every once in  a while, but I
ain’t no Andy Timmons, Nick Hamilton, or Eddie VanHalen. I took lessons from Mr. Langford
while I was in grade school at ABC Music downtown. It was wild. He taught in the
basement, and everything down there was lined in red shag carpet to keep the noise
levels down. It was dead silent down there. Really creepy. Afterwards, when he felt
I had learned all I needed from him, I took lessons from Pat Moore for a year or
two.  He taught me one of the most important things I ever learned. How to chart out
songs by hearing them only once or twice. Just in case I ever got hired for an
important gig at the last notice. That has came in extremely handy over the years. A
good instructor knows when to have a student move on. I have my son Darin take
lessons from Greg Martin. He is the best percussion teacher that I know. He is at
the Guitar Lab on Weinbach Avenue. (had to give him a plug)…

Jesus Christ is the first one. Anyone who can survive for over 30 years on
this hell-hole without pissing off God is pretty cool in my book. Plus the
dying for our sins thing. That comes in real handy a lot. He is a very good looking
dude. The pictures you see of him down here don’t really do him justice, but that’s
a whole different story.

The second would be my Mom. She died just a few years ago. She did everything
possible in order for me to play. Drove me everywhere, and did her best to keep me
out of trouble. I remember one year, I was in “All City” band, and I had to play a
drum solo which required me to have one more tom tom to pull it off. She took up a
second job, and bought me a brand new Pearl 5 piece drum set with cases. Money was
really tough back then. She could have just ordered me another tom, but she always
wanted me to have the best of everything. She spoiled the crap out of me. I guess
that is why I am so particular about my equipment and how everything sounds out
front. She also taught me not to be a drunk on stage, and to always try and put on
the best performance possible. “You never know who is watching” was what she would
say. So, I never drink on stage, unless it is very late in the last set. I may have
a couple of beers. I can not stand to see a band play half drunk all night, and
believe me, we have a bunch of locals who can not respect their audience enough to
give their best all of the time.

I really enjoy Neil Peart. He is way ahead of his time. My brother turned me on to
“Caress of Steel” when I was very young, and I was hooked from there on.

The drummer from “System of a Down” John Dolmayan is really good.

I have a very diverse taste in music, so I really can not limit my choices
too much. I really do enjoy the heavy stuff though.

And lastly, all 4-1/2 of my kids. They give me a huge amount of inspiration.
Especially my son Darin. He is 11 years old and can play the stuff I was
learning at the age of 14. He blows me away sometimes. Plus my wife Carla helps me in
any way possible. She is a huge blessing that words alone can not describe.

7. What do you think about today’s music in general, say from “Britney
Spears”, faking her vocals, to bands like “Lamb of God” not singing but
growling and others like “Slipknot”. Has music lost its voice or is it
right on track?

I think people like Britney Spears should take their money and spend time
enjoying life, and let someone else have the spotlight for a while. Talk about a
fool… What are her kids going to think when they grow up and get to see all the shit
she has pulled? Stupid bitch. And to think she was on the “Mickey Mouse” show.
Cristina smokes her hands down. No comparison.
As far as Lamb of God and Slipknot, I have a thing for heavy music, and
those bands have excellent drummers that stay polished and keep their sound
consistant. Ain’t no slackers there. I do miss 3 and 4 part vocal harmonies though. A lot of
people do enjoy hearing “Cookie Monster” sing. I think it is an aggression thing.

8. Have you got a website/facebook/MySpace page where your fans can find you?

No. I find that to be arrogant. If someone else wants to do one for me, I
wouldn’t mind it. I am not one to brag and boast about my self. I let my hands do
that for me. Any fool can talk. It takes a lifetime to build character, and seconds
to lose it for good. That is a risk I try to avoid. I will however, brag and boast
about my kids though…that is my right and privilege.

9. Do you remember the first concert you ever attended? Tell us about it.

My brother Duane took me to see Rod Stewart, Steppenwolf, and Def Leppard. First
time I ever smelled reefer. I think I was about 8 years old. It was a great
concert. Rod Stewart always has the best musicians, and that night was no exception.
Plus I thought it was real cool that he kicked soccer balls into the audience
during the show. My brother was a HUGE influence on my musical background and tastes.
I was listening to Jeff Beck and Black Sabbath before I was in Kindergarten. He
took me to all of the good concerts when I was growing up. I remember the first time
I saw Ozzy solo. He had Tommy on the drums. He blew me away!! Humbled me something
awful!!! Plus Randy Rhodes and Rudy Sarzo were unreal. Randy really freaked me out.
I think he gave Mr. Van Halen a real good run for his money back when he was
around. I can still remember the day I heard about the plane crash. That was a waste.
Nobody has ever played the guitar like he did. I still get goosebumps when I hear the
song “Dee”. 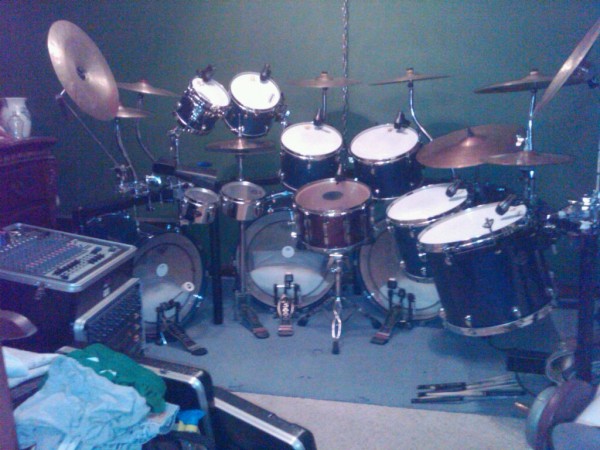 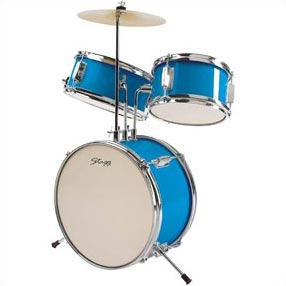 I am not one to preach, but…
We as a society have taken God out of everything. Everything!!. I believe
if people would just take the fucking time to tell God what is on their mind on a
daily basis, things would be a lot better. Who cares what religion you are using. There
is only one God, you stupid fucks!!! Get a clue. That is the one thing I can give
my ex-wife Dianne credit for. She raised our kids having a fear of God put into them. And it
has made them better people than most. They understand.

Also,
Music is the way it is today because our Government thinks it is not
important, and they know everything. My son had to wait until 6th grade to start playing
drums in school. That is pure stupid!! I had him holding drum sticks before he was a year
old. Music helps a person so much with people skills, and
Math, and being able to understand life in general. There is still some new good
stuff out there. You just have to look a lot harder for it than you used to. The “Green Day’s” and the
“System of a Down’s” still pump out the good stuff. But what do I know???

You and Kevin are stranded on a deserted island for life. No chance of
ever being rescued. You notice Kevin has a pack of Rawhide extra large
condoms with him, do you kill him then or sleep on your back until he
trains a monkey to be his soul mate?

If Kevin ever got a chance to see my dick, he would be begging me to train
a monkey. I have to give Carla credit for that answer.

All in all, I have had a great run with music, and I wouldn’t change it for
anything. That is one of the only times I am truly happy, is when I am behind on of
my drums sets jamming.

The “Chet and the Molesters” gigs start with us at the Southside II in Boonville on
January 16th. And our second gig is at Obrian’s in Evansville February 26th and
27th. We invite everyone to come out and enjoy the party. We will also be posting
all of our dates on WWW.Bandnut.com, and www.chetandthemolesters.com.

Thanks again for the exposure. You can never have enough. 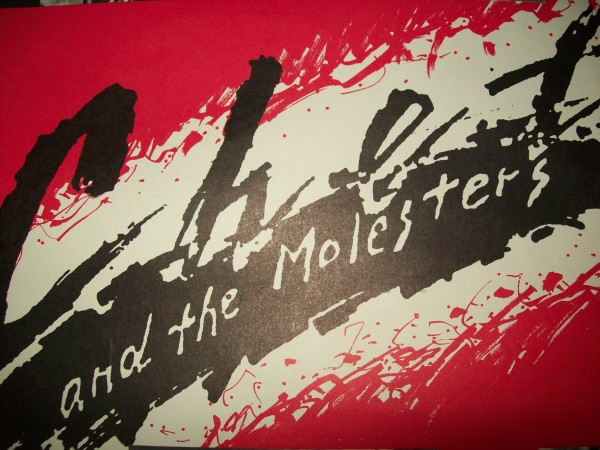