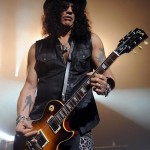 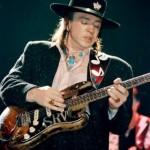 OK my fellow guitar heroes’ listen up. Down through the ROCK AGES there has been a distinct tonal difference between Gibson Les Paul guitars and Fender Strats. For the sake of competition from our axe slingers out there, I prefer the Les Paul, so I am biased. But for our audience that is unfamiliar with them, Slash plays a Les Paul on “Sweet Child o’ Mine”. He rocks back on the neck pick up and pours his heart and soul into that solo everyone air guitars to. Need another example? Zakk Wlyde also uses Les Paul’s. His awesome sound can be heard on “Ozzy Osbourne’s” No More Tears”. That opening guitar lick sets the tone. Thick and heavy and Zakk delivers it like Thor’s hammer to a nail. The Gibson Les Paul is a solid body guitar that was handed down by the rock gods to Mr. Les Paul to inspire countless kids to become rock gods themselves. In the other corner we have Leo Fender’s Stratocaster. Also handed down by the rock gods. The Strat is a thin body guitar that the likes of Stevie Ray Vaughn used along with Jeff Beck. It also has a distinct tone to it. Not as warm as a Les Paul but still a great sound. Jeff Beck and Eric Clapton prefer the sweet sounds that pour out of a Strat too. David Gilmour uses a Strat in Pink Floyd and no doubt about it, that guitar tone along with his playing helped set the mood for that “PINK FLOYD” sound. Check out “Comfortable Numb” for just one example. It wouldn’t be the same without it. So head to the comment section and VOTE!!I’ll post the winner next time around!!