Greg Pearce is a local producer and sound engineer. He has worked with several local bands, including Calling Corners & Dizzy Hollow. — He will also be working with yours truly in the very near future when I finally get myself into the studio and finish the songs I’ve been writing.

What exactly is a sound engineer / producer?

An engineer is strictly the person turning the knobs to make everything sound good.  Bands often go into a studio and expect the engineer to produce their album when in fact an engineers job is to set up the mics, press the record button (over and over) and mix what is given to him.  An engineer knows what every wire, button and knob in his studio does and knows what piece of gear to go to when the band says “I want it to sound like ______”.  Don’t go into a studio and expect that an engineer will be able to give you artistic advice or direction.  Some can, but many can’t … I mean, they’re engineers!!!

A producer’s job can vary wildly depending on the producer.  To me, a producer is a person that is hired to guide a band through the recording process and help them make a recording that “sounds like a record.”  A producer often picks out the studio, pays the bills, chooses a mastering facility, and gives the final approval at each stage of the recording process.  The producer is a trusted outside opinion and makes suggestions to the band to add or take away instruments to make a better record.  Some producers are very hands on and are in the studio each day with the band, some are very hands off and you will only see them when they come in to listen to the finished product.  A producer is NOT somebody that “makes beetz”, as MTV would lead you to believe.

I’d also like to note that I try to wear both engineer AND producer hats when I am hired to make a recording for somebody.  I only mention this because this is the frame of mind that I will be coming from when answering the rest of the questions.

What kind of training do you have?

What separates a good sound engineer/music producer from a bad one?

A good sound engineer/producer has the following qualities:

— Firstly and most importantly has a deep connection with music (read: is a musician)
— Has good ears (hears compression, distortion, etc)
— Is good with people (You will spend lots of time with this person!)
— Is well organized in the studio (Mixing takes a long time if not organized.
— Time is $
— Has been doing it a while

A bad sound engineer/producer has the following qualities:

What can bands do to make life easier for their sound engineer/music producer?

Show up on time, know your parts, and be ready to play them over and over again!

How did you get your start as a sound engineer/music producer?

Both my wife and I were musicians in local bands.  She came to me one day and said she would like to get a recording setup so that she could record her ideas for original music.  She has yet to touch it.

Who has influenced your work?

— Butch Walker – So creative.  He reminds me that it takes more than guitars, drums, bass and vocals to make an album.
— Aaron Sprinkle/JR McNeely – Anberlin’s Paper Thin Hymn is one of my reference songs.
— Chris Lord-Alge – AAR’s Move Along is another reference, although you could turn on the radio at any given moment and hear his work.  An absolutely prolific discography.
— Anybody that has come to record with me! Every time I step into the studio with a band to work on a project, I am influenced by them and learn new things. 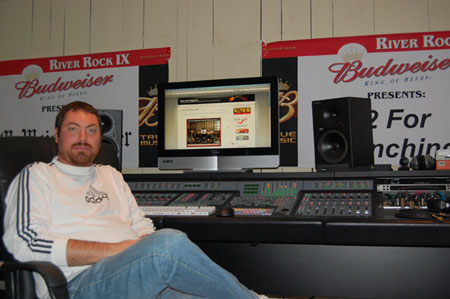 Do you do all the recording, mixing, and mastering yourself?

This depends on the project, but typically for an original EP or album, I do the recording and mixing myself and then send the finished product off to a mastering studio.  I do not pretend to be a mastering engineer as this is an art that takes many years to perfect, just like mixing.  It is also beneficial to have another set of trained ears to come in at the end of the project.  A mastering engineer is someone who will catch things that you may have missed due to sheer repetition (listening to the song so much that you don’t hear the problems), less than perfect monitoring conditions, etc.

All that being said, if I’m just doing a quick demo or something similar and professional mastering is not required, I will master the tracks myself so that the recording leaves my studio at a competitive volume level.

What do you really enjoy about this job and what tends to bring you down?

My greatest job satisfaction comes after I have mixed the songs down and the band comes back in to listen.  9 times out of 10 there will be smiles and that is what I live for!  I also love to play a role in the creative process.  I couldn’t write a good song to save my life, but I can usually come up with some decent ideas to take an existing song to the next level.

Having to spend bucks on cables and other not-so-sexy items brings me down.  And cleaning the studio is a bummer too …  😉

What are the essential elements you need to make a great recording?

The short answer is that I need great players with great material to make a great sounding song.  That will get you 85% of the way to a great recording.  No Bogner amp, DW kit, or expensive vocal mic will compensate for boring songs and/or sub-par musicians.

Assuming that is there, I ask bands to make sure they have the following items taken care of before entering the studio:

— Put fresh heads on your drums and tune them really, really well.  There is no shame in having somebody come in to tune your drums for you.  There is shame in crappy sounding drums!
— Bring in good amps.  If you don’t have a good amp, rent one.  No amount of EQ tweaking on my part will make a Peavey Rage sound like a Mesa/Boogie.

Is there anything you still want to accomplish?

Plenty!  I have no intention of making this my day job at this time, if that’s what you are asking, but I certainly have room to grow.  I want to record local bands and be able to have those recordings stand up against anything you would hear on the radio.  Unfortunately, the last 10% of getting to that level is rather expensive, but I’m working on that.  My goal is to eventually get a space to build out with good sounding live and controls rooms, assemble a killer mic closet, and buy some good outboard gear.  That is what I want to accomplish (without going into debt!).

What projects are you working on now?

VERY busy right now.  I just finished recording a local original band called Last Hour and am in the middle of mixing that.  An Abstract Becoming just came in to record a demo.  I am mixing a 16 track recorded live show for Second Story.  Last but not least, Dizzy Hollow just came back in at the beginning of the year to start a new EP!

What do you like to do for fun outside of working on music?

I don’t really have any other hobbies.  I can’t afford to do anything else!!!

How do you find work?

Through word of mouth, thankfully enough work finds me to keep me on the borderline of being kicked out of my house.  I’m at a pretty good balance right now, I think.

Open mic time …  Is there anything you would like to say?

I’ll take this moment to inject a shameless plug.  If anybody out there has a project that they would like to get recorded, feel free to email me at gregpearceemail@gmail.com.  I can certainly hook anybody up with some samples of music that I have recorded and would be happy to talk shop until you can’t take anymore!

I would also like to thank Kick Acts for taking the time to talk with me!  I love making music and its great to talk to people that share the love.