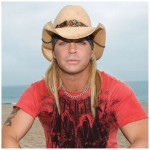 LOS ANGELES, Calif. — Two weeks removed from an emergency appendectomy, Bret Michaels was rushed to the hospital on Thursday night where it was discovered the rocker had suffered a massive brain hemorrhage, according to People.

The 47-year-old “Rock of Love” and “Celebrity Apprentice” reality star is currently listed in critical condition.

“After several CAT scans, MRIs and an angiogram, [doctors] decided to keep Michaels in the ICU and are running several tests to determine the cause. [It] will be touch and go for the next few days while he is under intense observation,” a source close to the situation told People.