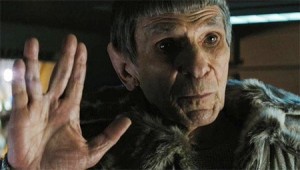 For those who were looking forward to Leonard Nimoy’s participation in the next Star Trek sequel — or perhaps an on-screen reunion between Nimoy and William Shatner — you can forget about it. According to the Toronto Sun, Nimoy will be retiring from acting once he finishes up his final appearance as Dr. William Bell in the TV show Fringe. “I’ve been doing this professionally for 60 years. I love the idea of going out on a positive note. I’ve had a great, great time,” Nimoy told the paper.