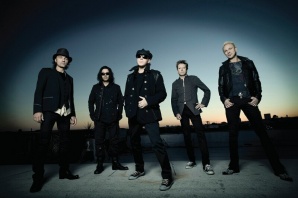 Answer: The tour started in May in Germany and Europe. We’ve been in the States for about three weeks, starting on the East Coast. And it has been amazing so far. Usually, the East Coast isn’t our strongest area. We’ve always been bigger on the West Coast and in places like Chicago and Phoenix, but the crowds have been very enthusiastic. I think part of that is due to having such strong new material.

Q: You mention Phoenix being one of your hot spots. You even wrote a song about the state (“Arizona,” from the 1982 album, “Blackout”).

A: Thank you for reminding me about “Arizona.” That’s a song we never play live, except when we are in Arizona. We don’t do soundchecks so we’ll need to find some time to rehearse it. We wrote it about our 1980 tour, with Ted Nugent and Def Leppard. We had played a show in Arizona and had a couple days off, just hanging out at the motel, drinking and partying with these girls we met. It’s just about life on the road in the early ’80s.

We’ve had some amazing shows in Phoenix as well. I remember the show at Compton Terrace in 1985. That was the only time Aerosmith opened for us. We’d opened for them in 1979 on one of our first visits to America. There were about 40,000 people there and the crowd got out of control – something happened – some people got hurt. They changed the capacity of the venue after our show. I know the next time we played at Compton Terrace, the crowd was much smaller. (New reports at the time said there were numerous fist fights and three people suffered superficial stab wounds but no arrests were made).

Q: You’ve been playing with the Scorpions since 1978. What are some career highlights for you?

A: I’ve been in this band for over half my life. Really, the Scorpions are my life. There are so many highlights, I can hardly pick one. Not just the big concerts, like the first Rock in Rio in 1985 or the US Festival in 1983. Probably the biggest honor was when we were invited to perform at the Kremlin by Mikhail Gorbachev in 1991, 10 days before his retirement – the first Western rock band to be honored like that.