You know him as “The SandMan”. He can be found at 103.1 on the FM dial. We all have welcomed his voice into our homes, factories, backyard grill outs  and drunken naked beach parties. Hell, he was probably  there when  a few legs have been “tapped” too in some of your backseats. He kicks ass and is above all the others. The # 1 voice on the radio . And…

1. Mike, welcome to KICKACTS. To the three or four people out there that have been locked in a closet with no radio for the past 20 years. Tell us a little bit about yourself.

I have been on air doing radio in Evansville since Dec. 1979. Most of my time has been with 103.1, either as KC103 which it was in the early 80’s or in it’s current incarnation of 103GBF. I have also been the station program director since 1996

2. You have been a part of the # 1 Rock station in this market since its debut as KC103 back in the day. How has radio changed since then?

Technically it’s been a quantum leap. From vinyl to digital. As far as being a dj, it’s still pretty much the same. Try and cut through the b.s. and get the listener back to the music asap. 3. In your spare time, what do you like to do other than radio?

Spare time? That’s funny!! I like getting tattoos, hanging out with chicks, listening to music, watching movies and sports.

4. Do you have any way of knowing how many people call in each time you open up the phone lines for a call in contest?

Nope. No way of knowing that.

5. You are the #1 rated DJ in this area, in fact you are a local celebrity in your own right. Do you get recognized in public with your voice?

Yeah, I do. It’s very flattering. I just consider myself a dude with a cool job.

6. Where is radio heading? Will it all be automated eventually?

In small markets, it is to a large degree. I think people in towns our size and larger still want local air talent who can give them local info. 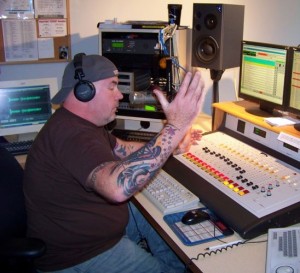 7. Most baby boomers associate the life of an on air personality to the lives portrayed in the TV sitcom “WKRP in Cincinnati”. Is it anything like that at all? Are there any Doctor Johnny Fever’s or Venus Flytrap’s not forgetting to mention Bailey Quarter’s or Jennifer Marlowe’s?

Oh yeah. That show is definitely based in reality. I’m probably a more hyped up, tattooed version of Dr. Johnny Fever myself.

8. What is the craziest contest stunt you have ever seen in your career.

We had a guy walk down the median on Green River Road in front of the mall in a thong to win concert tickets. That was cool. Attracted lots of attention.

9.You probably have the southwest wing of your house dedicated to rock and radio memorabilia that you have collected over the years. What is the coolest thing you have?

I’m not really too much into saving stuff like that. I do have a few platinum album awards from bands we’ve broken over the years like Creed and Godsmack. I have a few autographed items as well. Mostly it’s good memories.

Whoever said that rock n roll is the devil’s music was f’d in the head. Like KISS said ‘God Gave Rock n Roll To you 2″. Of course, I want to thank those who enjoy listening to 103GBF. And for those who don’t listen, give us a try…live a little! 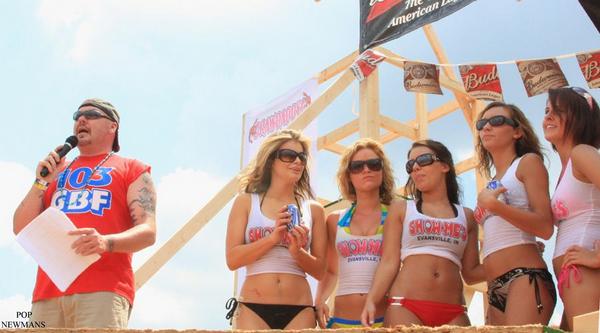 Talk about Perks... Mike having another "HARD" day at the office 🙂 ed.

Yes. Howard Stern is of course on satellite radio which is fading into the sunset to a large degree. But syndicated personalities have the power to attract big name stars onto their shows, which is something a station in a market our size couldn’t do on it’s own. I’ve never enjoyed John Boy and Billy personally. Too southern…too NASCAR for me. Bob and Tom offer comedy which has universal appeal.

Thanks for giving me the opportunity, Chuck!!