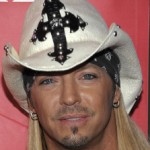 Indiana police found marijuana and other unidentified controlled substances on rocker Bret Michaels’ tour buses, The Fort Wayne News-Sentinel reported Friday. Two tour buses, one of which carried the rock star , were pulled over in DeKalb County, northeast Indiana, before midnight local time Wednesday. Police stopped the caravan because a trailer connected to one of the buses did not have a license plate light.