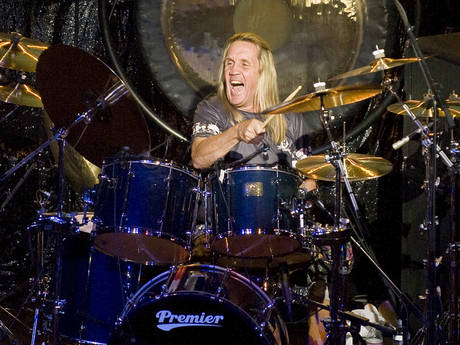 MusicRadar, McBrain discusses what it would mean for Iron Maiden to hit number one with The Final Frontier. The celebrated drummer, who now lives in South Florida, also talks about how the new album came about, his technique (double bass setups are still a big no-no!), early influences and what new drummers on the scene he admires.

You’ve had number one albums in the past in the UK and other countries, but it looks as though The Final Frontier could debut at the top spot in the US. What would that mean for the band?

“It would mean that our American fans listened! [laughs] You know, [singer] Bruce [Dickinson] made it quite clear to all of our fans in America and Canada when we were on tour there during the summer that it would be great to go to number one, so hopefully everybody paid attention.

“Going number one would be amazing, a great accolade, of course. Would it mean the same now as it might have 15 or 20 years ago? I can’t say. But at the end of the day, I know we have a great album. I think it’s a work of art. If it’s not the number one album the first week, then hopefully it will be the second or third week – once people give it a listen, you know? Obviously, it would be nice now that I’m…well, I’m not really a citizen. What am I, a ‘legal alien’ or something?” [laughs]

“People have called me that before I moved to America, so I’m used to it. Don’t get me wrong – it would be great to go number one in the US, and I hope it happens. Really, that would be amazing. If it doesn’t, though, hey, it’s not the end of the world.”

for a great and indept interview go here: