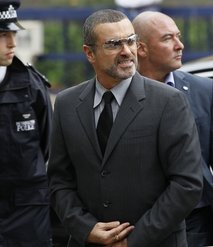 LONDON – A British judge has sentenced George Michael to eight weeks in jail for driving while under the influence of drugs after the singer crashed his car into a London photo shop.

The singer pleaded guilty last month to driving under the influence and possession of cannabis following a July 4 collision between his Range Rover and a Snappy Snaps store.

Michael was sentenced Tuesday at Highbury Corner Magistrates’ Court, which also fined him 1,250 pounds ($1,930). He is likely to serve half the time before being considered for parole.

Police said Michael appeared “spaced out” when they found him sitting in the car, whose engine was still running. He acknowledged smoking marijuana and taking a prescription sedative, prosecutors said.

It was the latest in a string of automotive and drug-related mishaps for the 47-year-old star, who has often spoken of his fondness for marijuana.

In February 2006, he was found slumped at the wheel of his car at London’s busy Hyde Park Corner. That April, he hit three parked cars while trying to maneuver out of a parking space, and admitted being “a terrible driver.”

In October 2006, he was found slumped over the wheel of his car as it blocked an intersection. He pleaded guilty to driving while unfit through drugs and was sentenced to community service.

Last year, he was involved in a late-night crash with a truck outside London. Michael released a statement stressing he was “stone cold sober” at the time.

Michael gained mega-stardom in his early 20s as half of Wham! and went on to have a successful solo career. His first solo album, 1987’s “Faith,” sold 20 million copies.