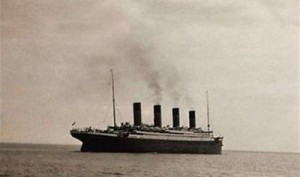 LONDON (Reuters) – The Titanic hit an iceberg in 1912 because of a basic steering error, and only sank as fast as it did because an official persuaded the captain to continue sailing, an author said in an interview published on Wednesday.

Louise Patten, a writer and granddaughter of Titanic second officer Charles Lightoller, said the truth about what happened nearly 100 years ago had been hidden for fear of tarnishing the reputation of her grandfather, who later became a war hero.

Lightoller, the most senior officer to have survived the disaster, covered up the error in two inquiries on both sides of the Atlantic because he was worried it would bankrupt the ill-fated liner’s owners and put his colleagues out of a job.

“They could easily have avoided the iceberg if it wasn’t for the blunder,” Patten told the Daily Telegraph

“Instead of steering Titanic safely round to the left of the iceberg, once it had been spotted dead ahead, the steersman, Robert Hitchins, had panicked and turned it the wrong way.”

Patten, who made the revelations to coincide with the publication of her new novel “Good as Gold” into which her account of events are woven, said that the conversion from sail ships to steam meant there were two different steering systems.