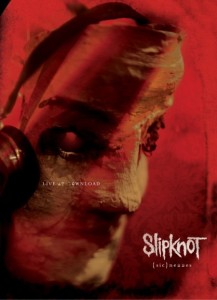 SLIPKNOT releases its new DVD, “(sic)nesses”, on Tuesday (September 28), with the disc chronicling the band’s June 2009 performance at England’s Download Festival, one of the last major performances by late SLIPKNOT bassist Paul Gray. The disc is dedicated to Gray‘s memory and percussionist Shawn “Clown” Crahan told The Pulse of Radio what to expect inside. “We kind of put him first in everything, you know,” he said. “You open up the booklet, you see his picture first. If you look in the back, his name’s first and, you know, we did our best just to just kind of put him out on front, you know. If you see an edit of him in the film, it’s probably a little bit longer than a Clown edit, as it should be, you know, because we miss him and this one’s for him.”

Two special “director’s cut” screenings of (sic)nesses were held in New York and Chicago on Monday night (September 27), with Crahan — who directed — attending the New York one.

A third screening will be held in Los Angeles on Tuesday night.

In addition to the concert, the DVD also includes a tour documentary and four music videos.

Paul Gray passed away last May from a drug overdose at the age of 38, leaving SLIPKNOT‘s future uncertain.

A lengthy written dedication to Gray is also printed inside the DVD packaging.

“(sic)nesses” captures SLIPKNOT‘s unforgettably electric headlining performance at U.K.’s Download festival, where the group brought the venue to its knees with a performance that’ll put viewers in the front row, butted up against the barricade, surrounded by thousands of fans losing their minds to their favorite band. Additionally, the DVD features several riveting extras including a 45-minute film, music videos and much more.

* “Audible Visions Of (sic)nesses” – 45-minute film directed by M. Shawn Crahan that captures SLIPKNOT on the road during the “All Hope Is Gone” cycle