He will forever be associated with SKID ROW, he might as well get over it, it continues to sell tickets for him and line his pockets…(chuck) 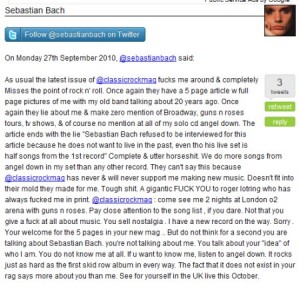 Ex-SKID ROW singer Sebastian Bach has slammed U.K.’s Classic Rock magazine for allegedly “fucking him around” by running a five-page feature on his former band that’s trailered as “When SKID ROW found Sebastian Bach, they thought they’d found the rock star who could take them to the big time. What they got was an ego that threatened to destroy the band.”

Bach wrote at Twitlonger.com, a related Twitter site where one can post messages longer than 140 characters, “As usual, the latest issue of Classic Rock mag fucks me around and completely misses the point of rock ‘n’ roll. Once again they have a five-page article with full-page pictures of me with my old band talking about 20 years ago. Once again they lie about me and make zero mention of Broadway, GUNS N’ ROSES tours, TV shows, and, of course, no mention at all of my solo CD, ‘Angel Down’. The article ends with the lie, ‘Sebastian Bach refused to be interviewed for this article because he does not want to live in the past, even though his live set is half songs from the first record.’

“Complete and utter horseshit. We do more songs from ‘Angel Down’ in my set than any other record. They can’t say this because Classic Rock mag has never and will never support me making new music. Doesn’t fit into their mold they made for me. Tough shit.

“A gigantic FUCK YOU to Roger Lotring who has always fucked me in print.

“Classic Rock mag: Come see me two nights at London 02 arena with GUNS N’ ROSES. Pay close attention to the song list, if you dare. Not that you give a fuck at all about music. You sell nostalgia. I have a new record on the way. Sorry . You’re welcome for the five pages in your new mag. But do not think for a second you are talking about Sebastian Bach. You’re not talking about me. You talk about your ‘idea’ of who I am. You do not know me at all. If you want to know me, listen to ‘Angel Down’. It rocks just as hard as the first SKID ROW album in every way. The fact that it does not exist in your rag says more about you than me. See for yourself in the U.K. live this October.”