Greg had been hospitalized in New Brunswick, NJ after he overdosed on prescription pills last weekend. A source said the overdose was not a suicide attempt. 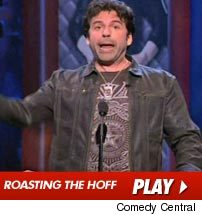 TMZ has obtained what is believed to be the last photo of Giraldo — taken at the Stress Factory comedy club in New Brunswick, NJ on Friday September 24 … the night before he OD’d.

Giraldo was best known for his celebrity roast appearances.
He had also been a judge on “Last Comic Standing.”

A source close to Greg tells us, “Greg passed away today
at the hospital in New Brunswick as a result of an accidental
overdose. His family was by his side.”

Here he is  kicking David Hasselhoff