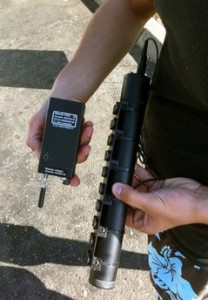 The wire was attached to a strange magnetic device that puzzled Afifi and the mechanic. They freed it from the car and posted images of it online, asking for help in identifying it.

Two days later, FBI agents arrived at Afifi’s Santa Clara apartment and demanded the return of their property — a global positioning system tracking device now at the center of a raging legal debate over privacy rights.

One federal judge wrote that the widespread use of the device was straight out of George Orwell’s novel, “1984”.

“By holding that this kind of surveillance doesn’t impair an individual’s reasonable expectation of privacy, the panel hands the government the power to track the movements of every one of us, every day of our lives,” wrote Alex Kozinski, the chief judge of the 9th U.S. Circuit Court of Appeals, in a blistering dissent in which a three-judge panel from his court ruled that search warrants weren’t necessary for GPS tracking.

But other federal and state courts have come to the opposite conclusion.

Law enforcement advocates for the devices say GPS can eliminate time-consuming stakeouts and old-fashioned “tails” with unmarked police cars. The technology had a starring role in the HBO cops-and-robbers series “The Wire” and police use it to track every type of suspect — from terrorist to thieves stealing copper from air conditioners.

That investigators don’t need a warrant to use GPS tracking devices in California troubles privacy advocates, technophiles, criminal defense attorneys and others.

The federal appeals court based in Washington D.C. said in August that investigators must obtain a warrant for GPS in tossing out the conviction and life sentence of Antoine Jones, a nightclub owner convicted of operating a cocaine distribution ring. That court concluded that the accumulation of four-weeks worth of data collected from a GPS on Jones’ Jeep amounted to a government “search” that required a search warrant.

Judge Douglas Ginsburg said watching Jones’ Jeep for an entire month rather than trailing him on one trip made all the difference between surveilling a suspect on public property and a search needing court approval.