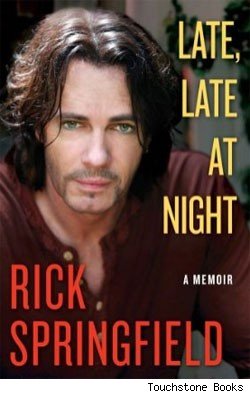 I just recently got to read Rick Springfield’s autobiography entitled “Late, Late at Night”. I have to tell you it was quite an interesting read. Most of you might just consider him a pop “Rock Star” but the book covers far more than that. He drills down deep into his upbringing, mistakes and successes and doesn’t hold anything back. He basically bares his soul and at his own expense. It covered him growing up in the fifties back in his home in Australia and how he was somewhat of an army brat and how he and his parents moved about every three years. He talked about his first guitar and the love he has for animals and of course his career from his start on “Mission Magic” on the Saturday morning cartoon show.  Anyone remember that? I do…

The book covers basically his entire life warts and all. His many ups and downs and not sure “of’s”. The impression I also gathered from the book is he, like a lot of musicians and people in general has had a severe bout with depression his entire life. Even at the top of his game when he was “Noah Drake” on General Hospital and having a hit record at the same time he felt like he was worthless and even at a young age attempted suicide. Obviously, being a child of the 50’s and touring by late 60’s, he experienced and was caught up in the “what was normal at the time” drug scene… Even telling that he got the clap a few times and something to the fact he was wearing his dick out (his own words) on the endless groupies…

But the book is much more than that… I don’t want to give away too much information but he talks about some of the exciting gigs he had over the years and even playing in Hot Zones in Vietnam and helping load mortars while their camp was under fire.

I highly recommend checking out the book. I couldn’t put it down.

to buy it on Amazon, go here: