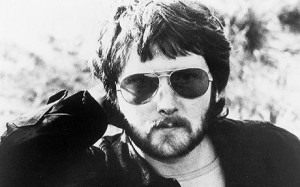 Gerry Rafferty, who achieved fame first for the 1972 song “Stuck in the Middle With You” and then for his saxophone-driven soft-rock classic “Baker Street” from 1978, died Tuesday morning. The singer, who suffered from liver disease, died at age 63, according to the Guardian.

Although his hit songs were all over the radio when they were first released, Rafferty and Stealers Wheel found a second life when director Quintin Tarantino used “Stuck in the Middle With You” in a grueling scene in “Reservoir Dogs.” (We’d love to embed the scene, but in addition to the general cussing throughout, it also features actor Michael Madsen’s character cutting off someone’s ear.)

Despite the graphic scene, Rafferty will be remembered for his sweet, delicate voice, which made the Tarantino cue in the film even more jarring