Hello day three of Rocklahoma!! Ticket holders had the choice of buying single day passes, three day passes, VIP which included access to the VIP tent where the Pryor Chamber of Commerce deserves a gigantic thank you and thumbs up for serving home cooked food all weekend and free drinks as well. The VIP tent also was air conditioned which was a good thing because temperatures with the heat index were over 100 degrees on SunFunDay. The stages were even hotter. With music that is. One of the media groups that also assisted bands and stages( Axis and Camp Jager among others) was BleachBangs Radio. I would like to give them a big shout out and let you know you can tune their show in every Tuesday at 8:30 p.m. EST. www.bleachbangs.com will take you there! Charlie, Randy, John and Ben, are the broadcast along with a great gang of people! They have rock, interviews with bands, and also have a blast!

When we woke up or arrived on Day 3 at Rocklahoma 2011 we knew it! Everything was more intense, more exciting, hotter, a lot more fans, media, security, production and artists moving quickly all across the grounds. For the first time ever, Rocklahoma was sold out. HELL YEAH ! Buckle up and let’s ride…

Wildstreet, Pretty Little Suicide, New Cool World and many more all rocked the Retrostage once again and fans were packed in and rockin’ their asses off! Despite temperatures rising into triple digits. The Hard Rock stage was amazing SunFunDay!

Art of Dying from Vancouver Canada is trail blazing up the billboard charts and also do a modern hard rock concert that you won’t soon forget! Sharp, steady passion from Tavis Stanley’s guitar, Jonny Hetherington seducing you with deep expression and lyrical genius. Cale Gontier’s bassline is a pulsating wall. Drumming that crashes down around all this music. Jeff Brown’s  live Drum work will rip your heart out and give it back after the show…maybe. Art of Dying does not miss a beat. I am not exaggerating one bit. The rest of the free world agrees from what I can see. Live concert heaven. Also really fun, good guys! They signed autographs and visited with fans and you could see the sincerety between them. Vices and Virtues is the name of their album. Don’t walk, run and get one. It is that good. One of the best bands I have seen, ever. Rocklahoma enjoyed every minute of the Canadians. I will have an article soon individually on Art of Dying ! 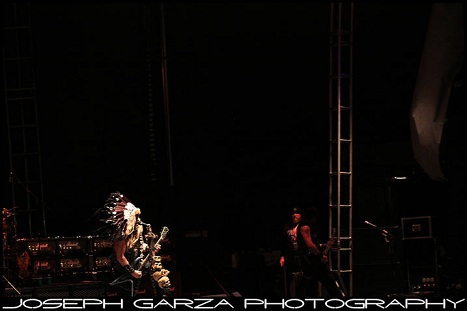 Black Label Society who by all means could have packed the main stage, instead played on the Hard Rock Stage. In between Poison and Motley Crue’s sets the musical brilliance of Zakk Wlyde was in full force. BLS opened with Crazy Horse and Zakk in a full Indian head dress !HELL YEAH! A sea of Black Label Society family as far as you could see showed up had the night of their life! The whole band just pulsated all 400 acres with pure, real, rock. This was one of the best shows of the weekend by far. I did get to meet and interview Zakk Wylde and he was very open, honest and personable. His motto, “Don’t take yourself too damn seriously.”

Another band I saw that really got my attention on SunFunDay was Papa Roach. They put on an excellent live show. Great sound team. No slow dance in this show. Papa Roach delivered on their rock. 100%.

One thing that did seem really off was the sound at the Hard Rock Stage at different points throughout the weekend. As if they did not have it turned up enough or tuned up enough. Not sure why. I heard others also say the same for Sebastian Bach’s show too. All in all the festival was success. I haven’t talked to anyone who doesn’t want to be at year six.

Saving Abel blew me away. I have seen Saving Abel in concert before they were great. At Rocklahoma, Even better. Jarod, Scott, Jason, all of them really were amazing this Memorial Day Weekend. After all they are all about thanking our military which is cool! The album is “Miss America” , if you don’t have it, really go get it. They will definitely keep your rock hand up! 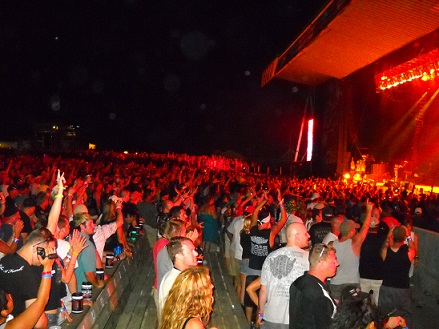 With soaring temperatures and hot rock came dehydration and heat problems for some that I saw unfortunately. When at these festivals, please do take care and drink plenty of water and get cool every couple hours. Also wear sunscreen and reapply! It can save you missing the shows and spending the day or more at the E.R.

I would like to say how awesome radio row was this year in particular. KMOD of course in the booth near the Main Stage ROCKED! Lynn Hernandez did some announcing and also his broadcast live and was a HIT! HELL YEAH LYNN! www.kmod.com Also Mr.Pretty and Greg of Q102.3 they had a Semper Fi (Marine) Flag flying in the booth and totally rocked! They interviewed bands, entertained fans and just in general were fantastic! Check them out. http://www.woodwardradio.com/Q102.html

Seether’s show was a mix of all things real and rock. It honestly was kick ass. Many concert goers reviews across the net raved about this particular show as well. I do have to agree. It was fabulous to see them play live.

The original members of Poison looked good and sounded even better. Bret appeared very healthy and did not have a weak point in his show that I saw. They are on tour with Motley Crue currently, Rocklahoma kicking off their US dates. One thing that stuck out was ALL day SunFunDay on the Main Stage was the “25 stage” setup. Standing for twenty five years rock with Poison. I am not quite sure how Papa Roach, Saving Abel, and Seether felt about that but it appeared odd.

Motley Crue was a blast from the rock past that was just as awesome as in the day! They gave fans exactly what they came for. A rocking Motley Crue Concert. Tommy Lee at one point, screamed “Put your cameras and phones down! Buy a drink! Rock concerts are not a F@@king kodak moment!!” he then offered to give everyone a kodak moment. Hmmm… POSSIBLY, Bret Michaels and Tommy Lee thought they were the only ones playing today.

Joseph Garza is the photographer in most of the photos in my stories and I am sending him a massive thank you for the work he did to bring us these shots. Please stop by his site or facebook and say hello. http://josephgarzaphotography.webs.com/

Thank you to all worked Rocklahoma ! Amazing job. And big thank yous to the artists as well as our Military. And one inparticular, Michael. YOU ROCK!\m/

Check back for my credits list and individual band articles as well as more photographs!