Special thanks to James Lowe for sharing this great interview with us here at Kickacts.

1. Michael thanks for chatting with us, I know your busy on all the projects plus getting ready to ramp up for Full Throttle Saloon on Tru TV, Tell us what are some crazy stuff you got planned for the new Season?

Well we really raised the bar this year. We have more midgets, larger acts such as Ted Nugent, Hinder, Theory of a Dead Man and of course Jackyl. Our bartenders are the best we have ever had. The Flaunt Girls brought in
new elements to raise the entertainment level of their show. We also brought in freak shows and some of the best bike builders on the planet.

2. Michael, the new season is getting ready to kick off on Tru TV, Now Tru TV has gotten HUGE ratings and a ton of new content, alot of people are giving Full Throttle Saloon the credit, whats your thoughts?

I’m really humbled by all the responses to the show. I think that the program is way different than other shows that are on the network. Our story cannot be told in one hour, and it takes multiple shows to tell it. Some of
our situations take several days to unfold so you are left hanging wanting to find out the outcome. With that being said we are a real mini-series.

3 You guys average 15,000 guests a night, wow whatever your doing, keep it up, why is it so popular?

I think what sets the full throttle saloon apart from other places that it one of the only bars in the country that mixes all races and age groups. How many bars do you see that there is a 21 year old guy sitting on a bar stool beside a guy that 65 and they are hanging out and having a beer together?
They have one thing in common and that’s riding motorcycles. Most bars are so segregated by age.

4. You run the bar that is open 10 days a year? What the hell do you do the other parts of the year?

Well we are on the road all the time.   We go to other motorcycle shows all over the country and promote the rally sell t-shirts and rent cabins for the next Pappy Hoel Motorcycle Rally in Sturgis.  We do all the Easyrider
shows and other rallies like Daytona Bike Week, Myrtle Beach and Laconia Motorcycle Week etc.

5. You’re out there biking, and riding your motorcycle all over the highways and byways across this great land, what do you hear the most about the show when people see ya and chat about the program?

6. Speaking of riding the bike, a lot of people are taking up Motorcycle riding these days, what’s your take on the trend?

Well I think that peoples lives are so busy these days that they really can’t find the time to go to the lake or take week-end vacations. If you own a bike, its right in the garage you can jump on it, and go cruise for an
hour or two when you get off work, or you and your girl can jump on it and go out to dinner. It’s just such a fun thing to own, and you don’t have to plan it all out.  Just jump on and ride.

7. Working with Jackyl front man Jesse James Dupree, How has the business changed over the years what have you guys done with the bar that have improved the experience for the customer?

Jesse and I became best friends over the years. It’s funny how we met. My first year we opened, he called and was in Sturgis and wanted to play. He was out promoting his solo record. So we took him up on it and hired him to
come in and he killed it.  The next year Jackyl came out and played, and it has been there home every year on the Thursday night of the rally. It’s called Bikers Ball, and it has become the largest show in Sturgis during the
Pappy Hoel Motorcycle Rally. Jesse and the band have become huge supporters of the Throttle. They preach the word at every Jackyl show!!

8. You have some experienced talent performing on this season, how was it putting Ted Nugent out there with all the Crazyness of The Saloon?

Ted fit right in! We are a blue collar biker bar and you know how blue collar he is so he felt right at home! The bikers love Ted so we knew it was going to be a great night!

9. You recently told the press, ““This season we are giving the phrase taking it to the next level a whole new meaning.” Good lord, what the heck did you mean by that, ha ha.

Well we decided to pull out the stops for this year. We did just that 360 degrees. lol…You are going have to tune in on November 30th to get this one answered!

10. This past June, you guys took this thing on the road, WOW what the hell was production like for this, I understand 3 tractor trailers, tell me about it?

It was just that 3 tractors trailers and 2000 miles to set up the world’s biker bar in Laconia NH during their motorcycle rally. Angie wanted to kill me! Both she and Jesse thought I was crazy. We pulled it off and it
was a great rally. I can comfortably say we left a stain on that town! lol

11. I understand you have plans to do a tour or something with this? True or just talk?

Laconia was a huge test to see if we could take this massive undertaking out on the road. It proved itself so Angie, Jesse and I are planning a Full Throttle Saloon tour coming in 2012 to a town or corn field near you.

12. Now has the Economic problems facing the nation have any effect on the Saloon, is this stressed at all in the upcoming season?

The overall rally was down in attendance this year because of our economic downturn we are under.  I know it sounds crazy that we raised the level on a down year, but we did just that. It made for a very nervous rally
for me, and you will see all this come out on the show.

13. Now are some of the signature characters from the past seasons coming back this season?

There are a lot of the same people coming back, and some that we did not want back if you know what I mean. The viewer will also be introduced to some new characters this season.

14. You took on corporate competition last year and came out ahead, tell us any info from what people already know?

Last year we had Corporate America come in across the street and try to take everything I have built there. They came in big and went home small.  I guess they did not understand our slogan we are Americas #1 Blue Collar
Biker Bar. It just shows the loyalty we have built with our customers over the past 12 years, and I appreciate them so much.

15. Finally I have to ask how is Angie Carlson and is she still as feisty this season as she was last season?

Angie is doing great! Her and The Flaunts are getting booked all over the country for all kinds of events. She is moving forward with her dream of animal rescue. Between the Full Throttle Saloon, Angieland’s Animal
Nation and The Flaunts she is all kind of busy. YES she is still a handful!!! She is on my ass as I type this lol!!!!!

Thanks Michael and looking fwd to seeing Full Throttle Saloon this season, Nov. 30th it returns only on Tru TV! 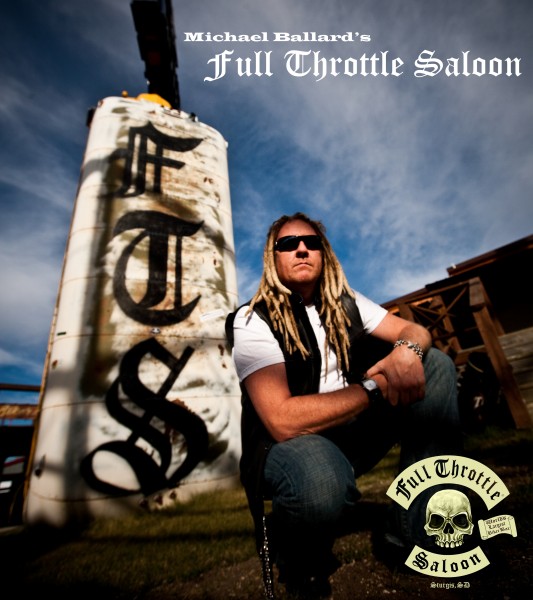