The following review is a guest post from SteveG. 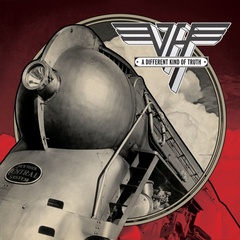 I have to be honest and say this would have to be brilliant for me to (1) forgive what the VH’s did to Mr Anthony, and (2) also be a big improvement on their track teaser Tattoo, for me to then put my hard-earned on it.

But equally I hate missing out on great music no matter my attitude to a band’s behaviour, so I have given all 13 tracks a few run-throughs and my advice is – sadly – save your cash. It hasn’t been worth the wait.

Song structures are very much the same from start to finish, choruses are there but mostly pretty forgettable (and some are downright awful, “Honeybabysweetiedoll” jumps to mind) , and if the riffs Ed uses were the BEST he has from the “hundreds/thousands of riffs/ideas” he constantly claims he has in his vaults… well, I suggest he deletes the others post-haste to not waste any more time on them. I will say one shining light is Ed’s solos which are, well… worthy of EVH, and certainly Wolfie’s bass playing is not a problem, mainly because you can hardly hear it in the mix!

DLR singing is ok (when he actually sings), cos’ on most of this he struggles to find a melody over EVH’s riffing…he “talk-sings” and rambles in the background a hell of a lot, and often seems a step behind the music, almost like he desperately playing catch-up. “As Is” and “Bullethead” are just two tracks this is pretty obvious on. And WAAAAAAY too much actual speaking in the slower bridges – good for effect here or there, but he does it on most of the songs! The acoustic blues/rock interlude “Stay Frosty” is a freakin’ talk-fest.

Repeated playing does not help – just nothing seems to stick for me. In fact Tattoo may actually be the best song on the album… which obviously says it all.

All up others may have a different opinion, but IMO they are badly missing Mikey (and in many ways Sammy) here esp. in the song writing & harmonies – that is if you could find one or two worth singing to.

This may be the only album we see the “re-formed” VH put out – its certain to sell a ton when first released just from fan expectation, but expect a quick slide down the Billboard 200 once the reviews start and the word starts getting around… and DLR & EVH decide they can no longer put on the front that they like each other.