Special Kickacts thanks goes out to Amanda Blide for interview with Planet Booty!

Howdy. I’m Nathan Germick, co-creator of “Planet Booty” with my brother Dylan Germick. Originally we’re from Northwest Indiana but have since landed in the San Francisco Bay Area. Planet Booty started as a concept album but has since evolved into a 6-piece electrofunk ensemble.

The list is long but includes: Prince (for being Prince), Talking Heads (for blending Afrofunk influences with unique synth pop),  and Ween (for their sense of humor and defiance of genre limitations) 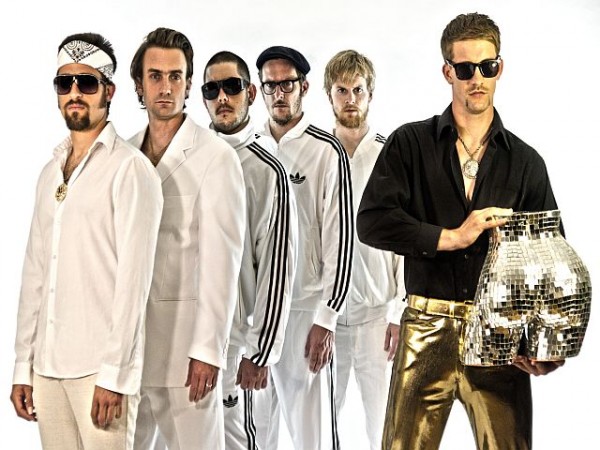 Follow your passion. Ignore the haters. Make as much music as possible. Finish things.

One of our first shows ever was on the day Michael Jackson died and we ended it with an a cappella sing-a-long of “Man in the Mirror”. We happened to be playing in a dance studio with tons of mirrors. It was quite an inspirational moment

We once played a show where someone (not in our band) thought it would be a good idea to spray the audience with a fire extinguisher—perhaps thinking sexy soapsuds would cover the crowd. Instead toxic chemicals forced everyone to evacuate the dance floor.

What do you think about the present music scene or lack of here in the Evansville area? Care to address that?

Book us a show and we’ll do our best to help turn things around!

Nathan is a master jello mold maker. Max’ dad has a pirate ship. Dylan will do your dishes. Rob studied film making with Werner Herzog. Mike sleeps with his drums.

Mrs. Howell—she clearly has a freaky side.

# 10 is called “Shout It Out Loud”. It’s where you get to talk about whatever you want to talk about. So go ahead and “SHOUT IT OUT LOUD“!

DON’T EVER BE AFRAID TO SHAKE YOUR ASS

Speaking of shaking your ass, Check out these vids from