This is going to be one awesome freaking day for Owensboro Kentucky. You got the Mighty, Mighty Lumber Jack Man himself. The one and only Jesse James Dupree from Jackyl  coming to hang for the poker run and bottle signing. 17 bucks gets you a personally autographed bottle of Jesse James Dupree‘s own brand of whiskey “Jesse James America’s Outlaw Bourbon Whiskey”. Pick up your bottle in advance at Val-U Liquors off of Highway 54 and then Saturday head on over to Pan Head Fred’s to hang with the guys and Jesse and be sure to set your radio dial to WXCM 97.1 , Owensboro’s premier Rock Station!

97X will also be raffling off a bad ass guitar autographed by Jesse James Dupree!! The money raised is going to the Wendall Foster center!!

Get on down there! Enjoy the bike show! Dunking booth! Hot Bikes, Hot chicks and cold Beer too at Pan Head’s Fred’s!Hopefully Jesse brings his chainsaw too!!BUZZZZZZZZZZZZ 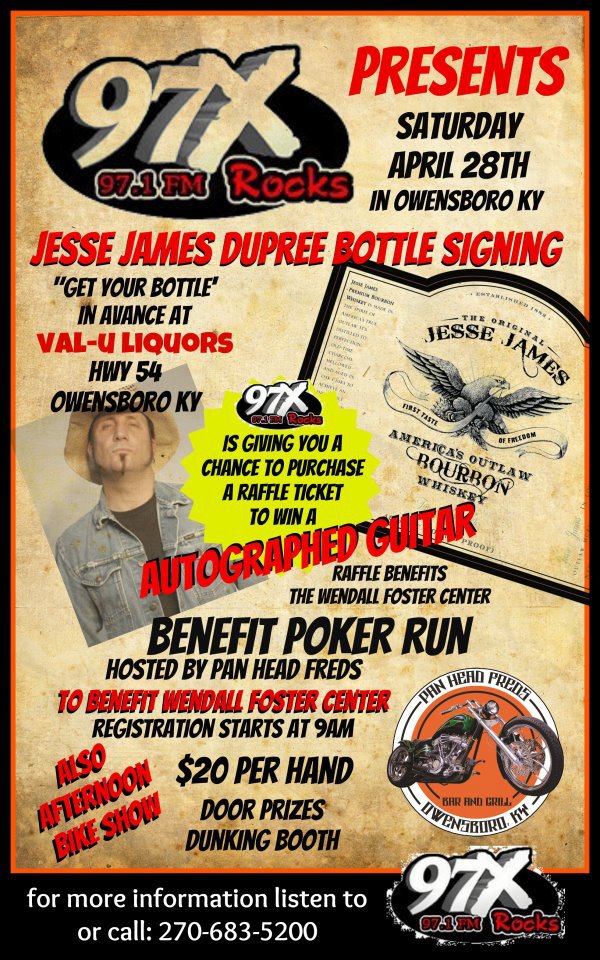 Check out Kickacts interview we did with Jesse James Dupree back in 2009 here!