“Blame the Radio” is going to be at the following dates in August! 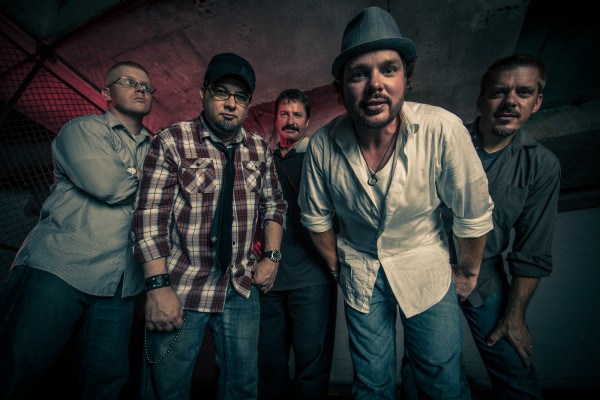 Hello Matt Camp and welcome to Kickacts. Tell us a little bit about yourself.

I am just a guy who is lucky enough to play music with AMAZING musicians and who
gets to be asked to be interviewed by cool mags like you! AND let me go ahead and
get this out of the way….www.facebook.com/blametheradio.  ;  )

Do you think there is an age “cut off” for someone trying to make it?

Sadly people hear what they see so age will always be a factor, however, I think
reality contest TV shows and Youtube definitely raises the age limit for a select
few musicians now. All in all it depends on how you define “making it” though. I
used to think it was defined by fame or a ton of cash, but passing years bring
wisdom. Now, I am just happy to say that 100 percent of my income is generated by
playing/teaching guitar, selling instruments, and writing music. It more than makes
ends meet now so…..THAT to me is “making it”.

What advice would you give to a young person inspiring to become a musician with hopes
and dream of making the “Big Time”?

#1 Have a backup plan. #2 Work at it like there is no backup plan. That means IF
this is truly what you want to do with your life then taking time out for TV, video
games, or even a social life is time wasted. The music business is too competitive
and there is always someone who wants it more than you.

You were in another pretty successful band “Calling Corners”. It had a great  debut album. Did it just run its course or…?

Calling Corners…………Still a source of pride AND a sore spot.  I guess all I
can say is that since we lost and replaced so many members the original vision got
lost. The members in the final line up of the band could never agree on our next
step so we never reached the most important goal of all for an original band….the
big radio single. I KNOW there were a couple singles on our “Evolution Season” CD
but none ever made it to the radio sadly.The music is still out there on iTunes,
Pandora, Spotify etc. so I encourage everyone to check it out. It really is great
stuff. It still bums me out everyday that we couldn’t take it further. NOTE :
guys/girls out there starting or already in an original band just know that the most
important ingredient for your group is a singular mindset.

Again, living always brings new perspective. There are still several Christians I am
proud to call my friends but I no longer share their views.  Also, make no mistake,
christian record labels will screw their bands just like the rest. My band in the
late nineties, PLUSH, certainly learned that the hard way. (interesting sub note,
our label was owned by former Prince guitarist Dez Dickerson)

Your new band is called “Blame the Radio”. How did it come to be and what was  the inspiration for that cool band name?

First off, thanks for getting the name right! ;  ) I guess the name Blame the Radio
just kind of came to me while I was dreaming up what a great setlist would be (IMO)
to keep a band working. Our sets are full of new pop and country singles as well as
the older guilty pleasures. You can blame the radio……….LoL

Shows, shows, fun, and more shows. I am happy to report the phone is already
ringing. It’s been awesome. Most of our shows will probably be around the tri-state
area. I’m still not ready for long road trips again. As far as an album, MAYBE we
will record an EP of originals at some point after we get more acquainted with each
other musically. I am still passionate about writing but we are just enjoying
playing our favorite songs for now.

How did Grunge help/hurt change the world?

Grunge, for me, had it’s ups and downs. I did enjoy quite a bit of it. Grunge gave
us great bands like Soundgarden, Alice in Chains, and Foo Fighters via Nirvana
so………that was definitely an “up”. It also gave some guitarist new hope since
the guitar parts were a lot easier to play than the shred stuff of the previous
decade. LoL. The “down”……..It derailed the careers of a lot of talented
musicians. Some “eighties” bands were admittedly cheesy but still wickedly talented.

You teach at the Guitar Lab. Anyone ever bring in something that’s harder than
hell to figure out any more?

There have been a few that have been a challenge for sure but I get the job done
regardless. Sometimes I need to take a song home as not to make the student wait but
since I have the music theory background the “math” of the music always reveals
itself……eventually.  Theory is a tool no serious musician should be without. 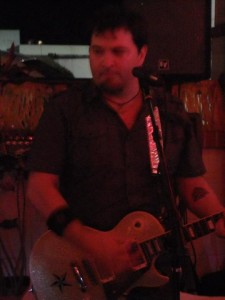 Good or bad. Simulated guitar sounds on ipads for use in live gigs. Are we going
the wrong way with technology?

There was a time when I would have sung the praises of technology, amp modeling,
software, etc. but the latest couple years my playing style has changed so much that
I have gravitated back to tube amps and classic stomp boxes. They are the only way
to truly get the “sound in my head” when I practice and write. Besides……at some
point music stops being real art (in my opinion) if everything is forced through a
digital path. Please take note Lil Wayne and T-Pain. Ha.

What’s your opinion of today’s music? Good and bad.

I think the production is, of course, better than ever. ( Technology  ;  ) ) That
being said I am embarrassed about the artist that actually get signed and America
gets behind. I am of the mind that artist like KESHA, Nicki Minaj, Pitbull, etc. are
contributing to the real life idiocracy of young people. There are so many GOOD
artist that get lost in the sea of crap that makes the radio. Temper Trap and Mark
Kano for example. Mark’s band “Athenaeum” had the same problem in the late nineties.
They were amazing.

I guess there are 2 things I could “shout out”. The first one being that I can’t say
enough great things about my new band mates. So sincerely talented and yet still so
easy to get along with. Music is fun again. Thank you Elvis, Gregg, Bruce, and Nick.

Secondly, I am back at Moore Music selling and repairing guitars. Some of the old
crew is back and there is also a new owner who is showing such passion for the store
and its patrons. We have killer new gear and are doing great new things together.

Did you have a crush on Holly Marshall from the “Land of the Lost”?

I honestly only got to see that show a few times so……no?

Without using the internet, do you know who H.R. Puff n Stuff is?

Not to show off but if I am not mistaken he was originally created for a late 60’s
World’s Fair and morphed into a short lived children’s TV program. Incidentally,
there were always rumors that the show was full of subtle drug use references. ;  )

Elvis dead or still in hiding?

Sorry guys…..pretty sure the “king” is dead.

To you, who is Greatest guitar player in the world and why?

That’s kind of like trying to pick your favorite child. Ha Ha. I guess right now
for me it’s all about Audley Freed, Larry Carlton, Joe Bonamassa, Eric Johnson, and
……..Bruce Patten.

What is the most worthless excuse for a band that ever was famous?

Sadly there have been MANY. Anyway, I am not sure if they are technically a “band”
but I would definitely start with Insane Clown Posse. I have an INSANE intolerance
for Juggalos! Horrible horrible horrible excuse for music.

Feel free to re post, re blog, re tweet, etc this interview in its entirety with a link back to www.kickacts.com