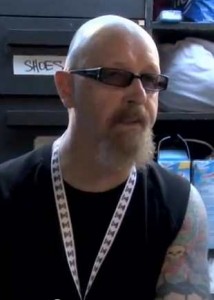 “Before I get into this, I just want to say that I love America. I love the American Constitution and the First Amendment,” Halford said. “I’m actually watching a PBS documentary that I got on DVD about the life of John Adams. If you really get into the heart and soul of this great country, it’s all about the constitution and the First Amendment and freedom of speech.”

He continued, “Everybody in this country has the right to say what they think and feel and what best represents them. The people at Chick-fil-A have the absolute right to say and do what they want. It doesn’t matter that all of these people disagree with their opinion. The question was how would the people that agree with what that man said do to support the company and how would the ones against his anti-gay remarks protest.

“The supporters have been showing up in droves, to spend money at the restaurants and peacefully assemble. But there has obviously been so many people who have gone out and boycotted the company. I think it’s great. That’s our right here. What you’re seeing here are the elements of the American Constitution in all of their glory. It’s a wonderful thing to see happening and talk about and the fact that everyone is discussing the gay-rights issue is great.”

Halford concluded: “I don’t think that man thought too much about the business consequences of what he said, but I think he was standing for what he believes in. I don’t agree with him at all, but God bless the man. It’s as simple as that.”

Look at this article link…

A Gay Chick-fil-A Employee Speaks Out