My Friend Jerry turned me on to Jay and Silent Bob and “Clerks”, “Dogma”, and “Chasing Amy”..”You see that man there, he is the Devil”..lol. Now I am a huge fan… I am posting in its entirety Kevin Smith’s post from his own Facebook page….What a stand up kind of guy.Go by his page and “Like” him and let him know… 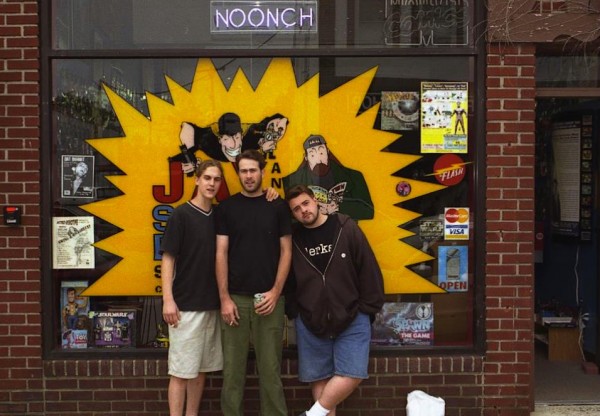 THIS LITTLE COMIC BOOK SHOP GROWS UP TO BE ON TV!

Jason Mewes, Jason Lee and me in 1997
at Jay and Silent Bob’s Secret Stash,
back when we first took over the former

Comicology on Monmouth Street.
The window was painted by SModcaster
Scott Mosier.

After two years on Monmouth Street,
we wanted more space to hang some
View Askew movie props and costumes,
so we moved up to the Broad Street location
you see on the AMC show COMIC BOOK MEN.

But the Secret Stash exists at all for two reasons:
a) I got an offer I couldn’t refuse, and
b) I wanted to give Walter Flanagan his dream job.

From 1988 to 1994, Walt and I bought new comics together every week, hitting any store or conventions in our area. And no matter where we shopped (Comics Plus, Ray’s or Fantasy Zone), the conversation on the drive home was about wishing for a life in comic books: writing, drawing, or even…

“Wouldn’t it be awesome to OWN a comics store?” I’d ask.

Ever the pragmatist, Walter responded “Nah. But WORKING in a comic book store’s my dream job.”

“You’d get your books the minute they open the boxes for the store cost and you’d talk comics all day long but you’d have none of the headaches.”

In 1996, the owner of Comicology announced he was moving and intended to sell the store. He asked me if I wanted to buy it and take over. I figured I’d open a comic book store one day when film was done with me, but this was a turn-key opportunity to buy into an already-established and operation business was so good, I moved up my timeline. We struck a deal for $30k – roughly $2500.00 more than CLERKS cost to make – for which I received all the store contents, the pull list customers and a fixed rent. Bry and Walt repainted inside, Scott did the front window, and we opened for business as Jay and Silent Bob’s Secret Stash
in December of ’96.

When Walter finally quit his job at the Highlands Recreation Center to run the Secret Stash full time, I made him the highest paid comic book store manager in New Jersey. He’s been running the place for nearly 16 years now, quietly thriving in boom and bust economies. And ultimately, all his hard word to keep the business profitable aggregated into a television show about the Stash – a television show in which Walter is the star. And you’d think that’d change a guy…

But not Walt Flanagan.

Last year, I told him “One day I’m gonna sell you the Secret Stash for a dollar, sir. It’ll be like your retirement package.”

“No thanks,” Walt said. “I don’t wanna own a comic book store. I just wanna run it.”

Well, your dream came true, Walt: you do, indeed, run the Secret Stash.

But as far as I’M concerned?