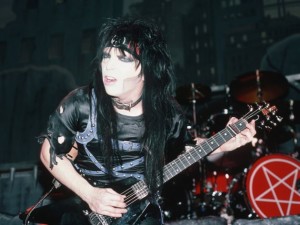 It’s a damn sad world when hardly anyone out there playing music for a living can’t do it without the help of auto pitch and back tracks. Especially in “Rock Music”. The “Pop” people have been doing it for years and yes most teen kids are used to being spoon fed crap but in the rock world I have to ask “Who has the balls’? The balls to play it like you wrote it and not to a bunch of backing tracks of keyboards, vocals, guitar tracks etc. I mean didn’t attitude make a band? So what if they drop chords and screw up vocal lines, it keeps it real.

Mick Mars just called out his own band for doing it and yes, we have known that the powers that be have also been spoon feeding us a “LIVE” “rock and roll” show complete with “canned” everything from Motley Crue for years and years…Tommy Lee hasn’t even been playing the piano part on “Home Sweet Home”..It’s all fake…Motley Crue and a lot of other bands have been filling us up with fire, smoke and hot chicks to take our minds off the fact that they can’t even play what they wrote…

Remember when Milli Vanilli was laughed off the stage for such “fakery’? These days bands are “rewarded” with such crap…

The first time I actually heard a canned performance that I “caught” was at a concert with the christian rock band “White Cross’ back in the early 90’s. It was during the song “In the Kingdom”.  The band had finished the song and  you could here the song playing over the front house almost as loud as the band was…I so disappointed.

Hats off to Mick Mars for calling his own band out…

He tells Eddie Trunk (via Blabbermouth): “That’s a whole another story – that could get me in a lot of trouble. Let me put it this way: I’ll just say two words and you’ll know. Britney Spears.”

He continues: “I don’t like it. I have to say 60s and 70s  bands were my favorites because they were real. They just got up there and kicked it up. Made a mistake – so what? Sounded a little bit empty here or there – so what? It’s the bigness and rawness and the people that wrote the songs and presented them.

“I could put on a Motley CD and play with it all day long. I don’t want to do that.”

Here is the link for the whole interview: