Station One is coming down. Built between 1950 and 1951 for Henderson’s growing demand for electricity and due to Government regulations in 1995 was retired. I know to some the old building is an eyesore. It’s no longer in use and just sitting there. I will admit, the area around it is an eyesore. The old conveyor belt systems and coal filled parking lots could be cleaned up and paved and grassed over. But when I look at that building, I think about the architects that drew up the original plans for the building design. Of course I wasn’t there but I picture them sitting around a drafting table thinking of a design that would best fit the interest and use of the new power plant and somehow “hat tip” to the Mighty Ohio River and her majestic banks.

When I look at the building I see a work of art. A practical working place and art all rolled up into one. It’s just not a plan building on the riverbank. When I look at it I see a paddlewheel boat. With it’s pilot’s house out in front of the three smoke stacks that follow. It’s as though she is steaming up river. Steaming her way into the future. Face into the wind. Bow into the current. Pushing water through time.  I am sure it was a delight to see her while  traveling on the river. Some I am sure when they saw it knew that they were back home safely in Henderson.

It’s a Landmark and well, I understand the building was built and insulated with asbestos at a time when asbestos was “in”. It has stood for sixty plus years and could have easily stood over watch for another sixty years but as it is said. “It is not meant to be”. Like a lot of other Henderson landmarks…Progress to some is more important than the history that is carries. So, she is coming down. She is coming down as I type. Preparations are already in place and she is expected to be gone forever by May 2015. The view of the river will be forever changed. From what I am told it will be a future park at some point. Which to the people that walk and traverse the river walk, that area will have a beautiful new view to look at.

To those like me that are attached to art and landmarks, it will be missed. But as I used to read in the Gleaner as a young kid in the editorials someone used to say all the time… “Progress is wonderful”. 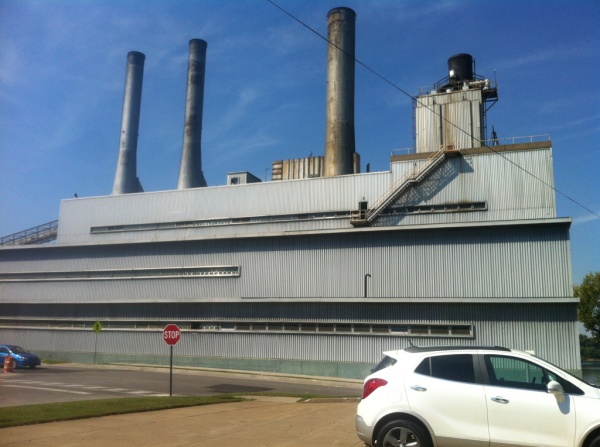