[hmtad name=”Adsense Unit 1″ align=”floatleft”]Phil Rudd and his troubles are all over the net this morning. Look’s like a sad ending to an otherwise successful life he has lead up until this point…If you are interested in Phil Rudd’s problems here in the Link. PHIL RUDD

However, I saw an interesting article in my newsfeed this morning about Fred Rogers. Or otherwise known as Mr. Rogers to millions of kids that grew up in the 70’s, 80’s and 90’s. He was a welcome friend to many of us everyday. I remember watching him in grade school. He was so important that we would stop class and tune in. I also watched him as I got older. Even as our kids were growing up I continued to watch Mr. Rogers’s Neighborhood. In a world where there is much chaos and unfairness, Mr. Rodger’s had a way of calming us down. We may not have had the best childhood but Mr. Roger was comforting and soothing…

Here are some excerpt’s from the article. 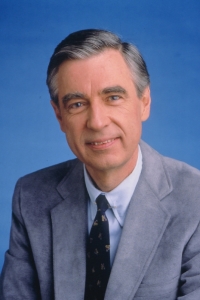 He was named after his grandfather, Fred McFeely, who often said, “You’ve made this a special day by just being yourself. There’s no one else in the world quite like you.”

According to The Simple Faith of Mister Rogers author Amy Hollingsworth, little Freddy Rogers was bullied walking home from school. “We’re going to get you Fat Freddy,” the other boys taunted.

“I used to cry to myself when I was alone,” he said. “And I would cry through my fingers and make up songs on the piano.” As he grew up, he decided to always look past the surface of people to the “essential invisible” within them.

For the rest of the article go here. FRED ROGERS