[hmtad name=”Adsense Unit 1″ align=”floatleft”]As a kid growing up in the 70’s, I missed the nuclear war drills. I remember reading about school kids being taught to “duck and cover” under their desk until after the “bomb” has dropped.  Then they could go back to their school work. What kinda crazy propaganda from our own Country of the United States is that. Remember the one commercial were dad turns off the stove and closes the window? The people of the United States were so naive to all of it. I am not sure our Government was though. Its no secret now that the Government tested these weapons on its own people. From soldiers sitting out in the open, to setting off over 1000 bombs for “testing”. Exposing native Americans to it by inviting them out to “view” the bomb tests. It’s a scary thought to think that these bombs still pose a threat. To see how naive we were and still are. But check out the photograph below of a mom and son in Los Vegas. At first it looks perfectly normal. That is until you see the mushroom cloud thru the window. Simply amazingly crazy. Also note that the U.S. Government used the “God is on our side” bit over and over as if God put his stamp of approval on us melting other people. I thought he said “Thou shall not kill”….
Check out the civil defense YouTube video from the 50’s below. Another great source of naive-ness. 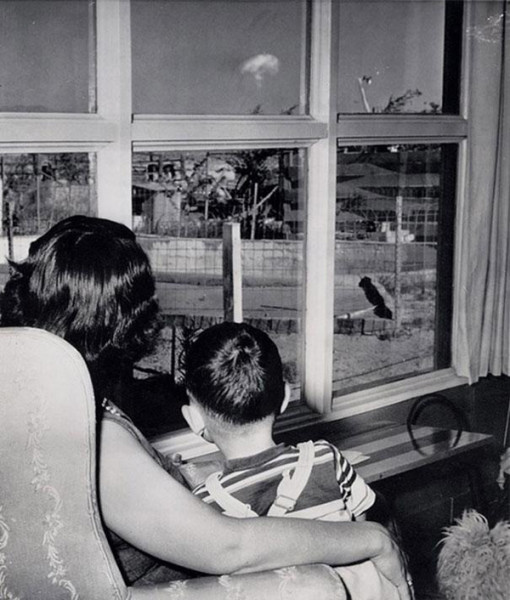 A different photograph of a mother and child viewing the atomic bomb. A big difference isn’t it?

Stunned survivors: A mother and child amid the rubble of Hiroshima … 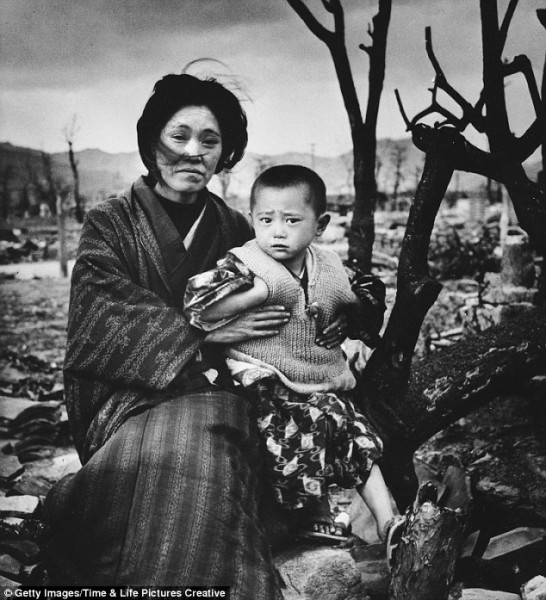 The Atomic Cafe from koba on Vimeo.