Sometimes some important timeless words get spoke at the right time and place. The Rev. Herron Wilson 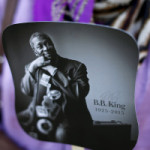 A woman holds a fan as she waits in the heat outside the B.B. King museum during a day of public viewing for B.B. King in Indianola, Mississippi May 29, 2015. Blues legend King, who took his music from rural juke joints to the mainstream and inspired a generation of guitarists from Eric Clapton to Stevie Ray Vaughan, died in Las Vegas on May 14, 2015. He was 89. REUTERS/Mike Blake

has this to say at the Funeral…

“Hands that once picked cotton would someday pick guitar strings on a national and international stage. Amazing,”

“For a man coming out of the cotton field unlearned and you take his music and draw four corners of the world together — that is amazing,”

INDIANOLA, Miss. — Hundreds of people filled a church in the Mississippi Delta for the funeral Saturday of B.B. King, who rose from sharecropper in the area’s flat cotton fields to worldwide fame as a blues singer and guitarist who influenced generations of entertainers. King was 89 when he died May 14 in Las Vegas. At his request, his body was returned to his native Mississippi for a final homecoming. Amid rain, about 500 people filled the sanctuary of Bell Grove Missionary Baptist Church, a red brick structure that sits in a field off of B.B. King Road in Indianola. More than 200 people who couldn’t get into the sanctuary watched a live broadcast of the funeral in the church’s fellowship hall, many waving hand-held fans with a black-and-white photo of a smiling King hugging his black electric guitar, Lucille.