et’s face it. Record companies no longer exist. The ones that do, don’t really support the bands anymore. No more large recording budgets or large touring budgets unless you’re already a large band with a large catalog and fan base. There are no bucks in music. The little that’s there is spread thin. So what do bands do to supplement their income?

They make money on soft sales. Every band has t-shirts, baby dolls, and other swag for sale. But some go further than that. For instance,  Michael Anthony has his own hot sauce. Jesse James from “Jackyl” has his own bourbon whiskey brand. As a band, you have to do what you have to do. Most bands sell packages of different levels to increase sales.

And now, setting the bar much higher by using her head and her “assets”, Veronica Freeman. The voice of  “Benedictum” and her just released solo album on Frontier records called “Now or Never”. Her website features different memberships and subscription levels too. From autographed Cd’s to T-shirts and, well…This special package for 50 bucks!

NOW OR NEVER…SEALED WITH A KISS Package! 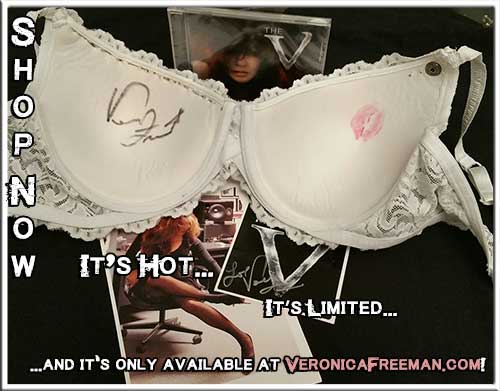 If by chance you think she is just all boobs and flash, check out her pipes here!
She can hang with any metal guy!
← Previous Post
Next Post →