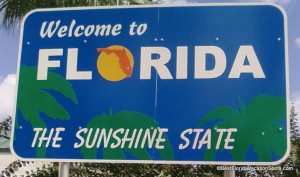 Our family started going to Florida for vacation starting way back in 1997. Back then, our now adult kids’ were little kids. We didn’t have much money but we thought they all should experience Disney World at least once in their lives as kids. I remember going to Florida as a kid in 1976 and not being able to go to Disney World. My family went to St. Petersburg and we were “that close” but Mom said “no”. So we didn’t go. It would have been cool to ride the 20,000 Leagues under the Sea submarine or watch the Mickey Mouse club gang being film but it wasn’t meant to be.

Fast forward some. So, we started the yearly family trips back in 97. We packed lunches since we really couldn’t afford to feed a family of five at Disney World. The kids never knew the financial struggle we had. My wife and I kept it secret. Granted back then the ticket pricing was different so we did convince our son Josh that he really was only 5 years old instead of 7 to get a ticket price break. We also had our oldest daughter Crystal who was 14 at the time to say she was 10. Again for a break on ticket prices. We had to do what we had to do. Britt was 10 so we kept her ticket honest. The kids had a great time in between the sandwiches and rides. All good memories.

So that was the start of something we have done almost every year since then. A family trip to Florida. Orlando was the “mecca”. We went to Ole Town in Kissimmee too. It was cheaper and not as crowded. The kids got older. We looked for hotel discounts etc. But we went. Family time was and still is, that important. 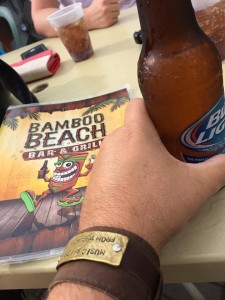 About 12 years ago or so my wife Denise’s boss owned a condo in Madeira beach. He rented it out when he wasn’t using it. Well, he let us use it. I hadn’t been to the St. Petersburg area since 1976. Once we got to Madeira beach it was love at first sight. It wasn’t a tourist trap but it had things the whole family could do. John’s Pass was right across the street from her boss’s condo (located in Madeira Norte’.) Our kids could go across the street to the shops or to the pier. We went deep sea fishing and dolphin sighting. Our kids and now grandkids love the Candy Kitchen!

Madeira basically became our second home. We go every year.  The kids could go to the beach. As they got older they would bring a friend or two. Then as they got married. They, along with their spouses and kids would also make the trip with us.

As the days turned into nights my wife and I would go across the street to a little bar called the Bamboo Beer Garden. It was a small friendly place and the walls and ceilings were covered in dollar bills. Signed and dated by the patrons and pinned in any open space one could find. We started our tradition too. We would go over there for a night cap. Reflect on the day. Make small talk with the others that were there. Tip the bartender and sign and date a dollar and add it to the collection. At that time Muffy the DJ would also do her karaoke act there. She wore poodle skirts and well the wind one time…Well we enjoyed watching her perform. It seemed like the people of Madeira Beach had something special in their mist. Our kind of place.

We did this every year. We would make the long drive to Florida. Rent a condo as close to John’s Pass as we could get and pull back on the throttle of life. Nice beaches, nice people. And more importantly not over run by tourists. Though I guess we were “technically tourists, or snowbirds”, we really considered it “ours too”. 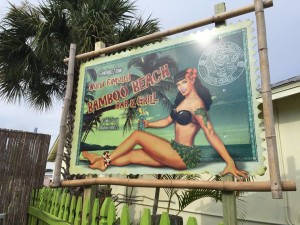 Time, like it does, doesn’t stop for anyone and moves on. The Bamboo Beer Garden was sold. The name was slightly changed. It’s now called the Bamboo Beach Bar & Grill. And it was expanded for more seating. They now have outdoor seating. Long gone are the probably hundreds of dollars on the walls and ceiling. I remember calling from Kentucky before we left a couple of years ago just to make sure it was still open. (It has that kind of cool atmosphere.) The new owners (They have owned it for a few years now) always recognize us when we show up which is amazing!

This June, as we do yearly, we rented condos at Madeira Norte’. Packed up and pointed all the vehicles toward our home away from home. Madeira Beach. We arrived on Saturday, and checked in. After we got settled in the family all headed to the Bamboo Beach Bar & Grill. I think I failed to mention they serve food too! Great food and it doesn’t cost and arm or a leg. We had a large group and they made sure to accommodate us. The waiters pushed tables together so we all could eat together close to the stage. 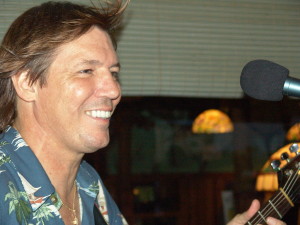 The entertainer that night was Mark Mann. A one man acoustic act. I enjoy listening to real musicians far more than a jukebox. That night Mark was killing it. A great show. He really entertains the crowd. He was also taking requests. I am an old school music kind of guy for the most part and requested “Sylvia’s Mother”. An old Dr. Hook song that my wife really likes to hear. It’s a great song and if you have never heard it before, check it out here. Up until that night at “the Boo”, no one that I ever requested to play the song would play it, or even heard of it for that matter. Well, Mark Mann not only knew it, he pulled it off! It was awesome! Another favorite song of mine is “Taxi” by Harry Chapin. He was such a great writer and story teller. I asked Mark Mann if he knew it and BAM! I was listening to him do “Taxi”. Mark Mann was knocking them out of the ball park to use an old Kentucky term! Mark Mann was a super nice guy and in between his sets he would come over and talk to us. We talked about the music life, our families and more. Like we had known each other for years! He was such a cool guy! Later on that night he invited me up to sing backup vocals on The Eagles “Take it easy”. I was road weary and a few beers deep but I felt honored that he allowed me the opportunity to sing with him. Most Musicians don’t share the stage even for one song. Mark Mann was different. No egos or attitudes, just a good time had by all.

See that’s the kind of place Madeira is. Nice people. Nice places to go. The Bamboo Beach Bar & Grill and Mark Mann helped start off our family vacation perfectly. My wife and I hope to retire there some day soon.

What started off as five people in an old car back in the 90’s has grown into 14 people so far! We’re already planning next year’s trip! We are looking forward to The Boo” and hopefully Mark Mann will be in the area playing!

Tell us about your vacation spots!

Until next time, peace out!