Some background info for the “younger” generation. 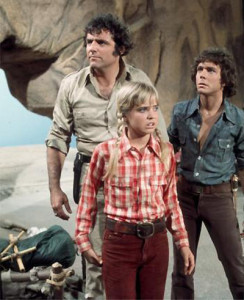 First off, when I was growing up, which really wasn’t that long ago, TV was a lot different than it is now. We didn’t have an unlimited amount of channels to choose from. Most homes as I like to say, had the “basic four and no more”. Netflex wasn’t around. Hulu wasn’t around. YouTube wasn’t around. In fact, the “basic four and no more” channels often signed off at midnight with the National Anthem. You would be watching TV if you were able to stay up that late and then you would hear “This concludes our Broadcast day” and with that, the TV went silent until morning. Very few channels stayed on the air 24 hours a day back then. Sound strange? Here is what most of us saw at midnight. https://www.youtube.com/watch?v=po_hBMtTaDg#t=37

With knowing now the back ground knowledge that we all had the same channels, we all watched pretty much the same shows. There were 3 major networks. ABC, NBC, and CBS. Channel 9 was a public funded educational channel. You could catch Sesame Street, the Electric Company” and “Mister Roger’s Neighborhood” on there. DVR’s didn’t exist. Nor were there any VHS recorders. The school systems used BetaMax machines and the average household didn’t have one of those. They were too expensive.

So most of our young lives were glued to the Saturday morning cartoons. We all watched these until 11am or 12pm and then headed outside to play. Play outside you ask? Yes. We got up from the television and journeyed out into the afternoon sun. In our neighborhood, we usually rode bikes or played basketball. Real bikes and real basketball. Nothing “virtual” back then. Real sweat and real fun.

When I was in grade school one of the most popular Saturday morning TV shows was “Land of the Lost”. A story about a dad and his two kids that went on a “routine expedition” and after going over a waterfall, woke up to a dinosaur roaring at them in a strange world with mystical pylons that controlled the weather and time travel. A lost city of ruins that held within its dark tunnels primitive creatures called “Sleestak”. They slumbered in the dark until awakened. My cousin’s little brother was scared of them so I made it a point not to spend the night at his house on Fridays. He wasn’t allowed to watch it and I didn’t want to miss the “Land of the Lost”.

It’s funny. Childhood shows and movies, like other memories get embedded in our beings and stay there forever. You never really forget them. To this day, I can remember most of the episodes. From finding “Dopey” the baby Brontosaurus to Enik learning that the Sleestaks’ aren’t his past ancestors but his future ones. The Marshalls’ also befriended a little Paku guy named “Chaka”. The generation I came up in were all raised on TV. We went to school and talked about what we had seen over the weekend. The playground talk went something like this. “Did you see “Land of the Lost” this weekend? Yea, the dinosaurs where “Groovy! “ And “Holly?’ “Dyn-o-MITE!”

Holly Marshall was probably most young guys and some girls’ first crush. At the time I was 8 years old when it came out. Not really noticing girls yet but did notice the little pigtailed tomboyish girl on the Land of the Lost. A few years later I would have those same innocent silly crushing on a girl on the New Mickey Mouse Club! It’s funny now and somewhat embarrassing to admit that but as a little kid I wanted to rescue the Marshalls from the Land of the Lost. I lived a pretty sheltered life and TV was my escape until I found music. That “escape” still continues to this day.

Land of the Lost ran for 3 years and then it was over. The last season “Uncle Jack” came thru the portal and Rick Marshall went home. In my innocent little mind I felt like Rick spent the rest of his life trying to get back to rescue the rest of his family. In reality, it was monetary disputes I think that sent “Rick” home.

Growing up and growing older as we all do hopefully, I like most people, often wondered what happened to Kathy Coleman. The little girl that played Holly. Occasionally I would catch an episode on TV and would watch it. As a kid I didn’t see the props and somewhat cheesy sets but for 1974 it was state of the art. The show creators took great care in producing it. Topnotch writers including some very famous sci fi writers. Great care was taken in each episode including the use of “green screens” and stop motion animation for the dinosaurs. But what happened to Holly?

She grew up. She got married. She got divorced. She had kids. She got…

And then the internet was born. A wonderful tool that instantly helped people reconnect with their childhood friends and memories. A website was started way back in 1997 called “Land of the Lost.com.” I was probably one of the first on the message board and emailing the owner George of the site. We all had something in common. We grew up in a good time. We all crushed on Holly. The website eventually had some issues from overzealous fans I guess and it sort of went by the way side. But we all asked over and over “Where is Kathy? 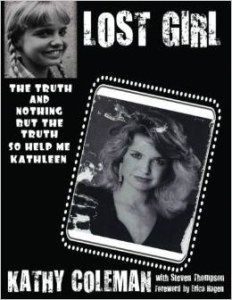 Fast forward to 2015. Kathy or Kathleen Coleman as she prefers to be called released her book “The Lost Girl”. It’s an autobiographical account of what happened to “Holly”. It fills in all the gaps  before her role as Holly and gets us all up to date on her today.

I recently got my autographed copy!. She will gladly sign it for you when you order one from here. >Amazon<. If fact, she mailed mine out the same day I ordered it and I got it two days later! How’s that for service! I read it all in one sitting. Not because it’s short. It’s not. Its 194 pages and full of never before seen photographs too! But it’s that interesting.  I mean here is “Holly” In her own words! The little kid in me couldn’t wait to read it! In saying that, I played music all my life and know some of the really bad pitfalls that can accompany being in the music business too but this book was a real eye opener. She didn’t live the charmed life. It was anything but that. We have all seen enough real Hollywood TV tragedies to find out that what we see on TV is not real after all. Some childhood actors never make it to adulthood. Kathleen lived it. More importantly, lived through it. Her being born in the early 60’s I would have suspected a somewhat bohemian lifestyle. It was more than that even if unintentional. The title of her book is “The Lost Girl”. It’s a slight hat tip to the 70’s show she was on but I think in reality it is more about her real life. The one we didn’t see. The one she lived after the show stopped production. She, like her TV family got into a raft and took the ride of her life and got “lost”. But waking up to fake dinosaurs’ had nothing on her real life screen. Her monsters were real. She couldn’t yell “cut” and the scene stop. I won’t give away any of her story. You should order her book 🙂 but I want to say this enclosing,  Land of the Lost is a great childhood memory. Watching it with a bowl of cereal and being mesmerized by the story lines and dinosaurs was surreal to me at the time. I grew up loving the show and the characters and continue to do so to this day. But I now realize that “Holly Marshall” wasn’t “real” in a sense. She was played by and brought to life by a great actress named Kathleen Coleman. The little kid inside me still wants to rescue the Marshalls’ but in real life, what really matters is that Kathleen rescued herself from the waterfall of this strange world and is doing well attending Comic and Sci Fi Cons and admired by fans all over the world. She in reality, found her way out of the “Land of the Lost”.