If the name doesn’t ring a bell, well it’s that isis jerk with the British accent in all the beheading videos. Apparently he was “beheaded” by a drone! Here are the details. The photo is upside down on purpose! 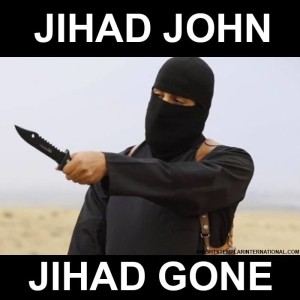 DEVELOPING –  The Pentagon said late Thursday it had launched an airstrike in Syria targeting “Jihadi John”, a British national seen in videos depicting the beheading of hostages held by ISIS.

Pentagon spokesman Peter Cook confirmed that the airstrike in Raqqa was directed at the notorious militant, also known as Mohamed Emwazi. It was not immediately clear whether Emwazi died in the airstrike, but a senior U.S. military official told Fox News, “we are 99 percent sure we got him.” The Pentagon was monitoring the aftermath of the strike before making a definitive announcement.