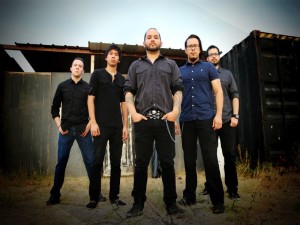 Metallica, Megadeth, and Danzig played a huge part in my decision to start a band. I was around 8 I picked up Kill em All on cassette not because I knew Metallica, but the cover itself with the hammer and all the blood got my attention. My dad bought me the cassette and hearing it on the ride home blew my mind. I asked so many questions as to what was making that cool noise. As soon as I found out it was a guitar I was hooked. A few months later some cousins introduced me to Danzig, and Megadeth. I was blown away by how insane Dave’s riffs sounded, and Glenn’s vocals were so cool. At that moment I said one day I will learn to play guitar, and start a cool band. The rest is history.

Yes, perfect your craft don’t get to anxious to perform so soon because you might set the wrong impression. Get a high quality recording of your music so can be taken seriously. Once the band is tight start performing with your local heavy hitters.

When we formed as a band we only had 2 weeks of practice. We were offered a show at a local festival, and a friend advised us to pass we were to green and our music was not perfected yet. Well we ignored his advice played a 20-minute set. It was horrible our timing was way off, we had no confidence and we had no stage presence we looked like trees.

We have a gross horror story. Mike our singer was chilling at outside a venue on Halloween we had just finished performing. A fan comes up to him praising the show. The dude was drunk, high who knows, but as he moved closer we noticed he pissed and shit his pants pretty bad. The smell was horrible, but the entire night he pretty much stalked Mike, and kept asking him for a ride home. Mike thought it was kind of scary I thought it was entertaining.

Do you have any other hobbies other than playing music? Collect stamps? Collect hats from off the side of the road? Draw pictures of peckers or boobs? Make sock puppets?

Sit in the dark and eat Cheetos? I am a huge horror movie freak. I like to collect horror movies past and present, collectibles, figures, clothing if its horror related I must have it.

I feel that it lacks variety, a lot of band’s sound the same. It seems like everyone wants to imitate what the current trend is, but the near future is looking good there are some up and coming bands who are thinking outside the box which is great.

Its killing the music industry, because those shows make it seem like you have to sound, sing, or look a certain way to make it in the music industry. Plus, it’s very prejudice with other genres of music such metal, hard rock etc.

I am against it because coming from a bands point of view the amount of money to make a
record is very expensive. We also have to plan tours etc. just to put out the music is an expense as well. Which is why it’s so important to purchase the music, because so many artists try and make a living out of this.

Rene our bass player is also a corrections officer yep he is the law on his cell block. Ram our lead guitar player likes country music he jams out to Luke Bryan, and Taylor Swift, we never jam his play list on the road. Rey our drummer works at a gym, but he’s not buff. Mike our singer works at a nutrition store, but he does not look healthy.

To be honest I have never seen a damn Gilligan’s island episode, but based on pictures I have seen I would say Ginger she has that I will bang your brains out look.

Yes, I really enjoy buying vinyl. The last one’s I bought was The Doors, and Deftones Around the Fur.

I would wake him up so he sees me choking him out. Then as he is out cold I would feed him to the sharks. YEP

Not a fan of her music, but I would probably hit it and quit it.

Real vocals for sure, I feel as an artist we owe it to the fans. They are paying for the ticket, and taking time out of their day to see you perform.

Metallica that band has been a huge part of my life for so long. Everywhere I go I have to have their music available.

I never told anyone this not even my family. Back in the day I was driving with some friends hot
boxing the car no big deal, but it was so cloudy in the car we rolled down the windows right next to a cop. He looks at us like you idiots, the lights come on we pull over all he says “where is the weed”. We look at each other like what? He asks us again to cut the crap and give him the weed. So we do he opens the bags we had, smells it and says looks good. He tells us to go home and he never wants to see us hot boxing again. We were quiet the entire ride home in shock that he took our stash and that we didn’t get arrested. (Sorry mom)

Blood in Blood Out, that movie covers it all family issues, life on the streets, jail, drugs. Plus, it brings back memories of my high school friends. That was the one movie we all agreed to watch if we were bored.

Our last question is called “Shout It Out Loud”. It’s were you get to talk about whatever you want to talk about. So go ahead and “SHOUT IT OUT LOUD”!
I think we pretty much covered it all. THANK YOU ALL FOR THE SUPPORT!!!!!!!!!!!!!!!! KEEP IT METAL