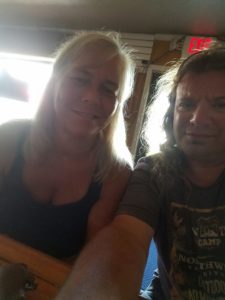 This past week my wife and I had a much needed week off so we went to Panama City Beach. We went with my cousin Kathy and her husband Bill. We split the tab on a nice condo at the Gulf Crest Condominiums. A nice 2 bedroom condo on the 23rd floor to be more exact. However, I did notice while on the elevator that there wasn’t a 13th floor. So in reality, its only 22 floors up. The missing floor must have been because of that one Twilight Zone episode or something… But I was secretly hoping to stop on the 13th floor and explore it but the elevator never opened up on it.

When we arrived in Florida early Saturday morning the weather was already nice. The Florida sunshine stayed with us all week. A few rain clouds here and there but for the most part, lots and lots of beautiful SUNSHINE! Back home in the great State of Kentucky it had been raining there almost daily for about two months. We were all way over the rain and needed a break. Kentucky was starting to look like Seattle! We thought we might have to start building a second ark, or is it the 3rd ark? I dunno. But the Florida trip opened up so we packed up and rolled out. BTW, I can pack in 5 minutes. My wife takes a while longer and takes more things. Like a huge 50 lb. carrying bag/tote thingy. My cousin Kathy however, Mrs. Howell is all I am saying! There was no room left in her Durango after she stuffed her luggage in there! Never again will I complain about how much stuff my wife packs!  After I got off work Friday afternoon, Bill drove all night to get us there.We arrived early Saturday morning and thankfully it wasn’t during Spring Break so the traffic wasn’t bad and everyone was calm on the beach. Nothing wrong with being young and having fun but I was needing to gear down and just enjoy life for a few. 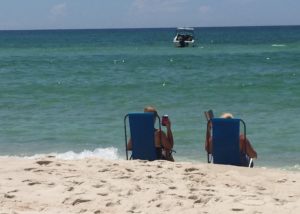 We were within walking distance to most places we wanted to visit. The other places we wanted to explore Bill took us. We don’t have an itinerary when we go on vacation. We just kind of wing it and play it all by ear. If we see something that looks interesting, we stop and check it out. My wife loves the beach. There was plenty of beach so that part was taken care of. You could walk out the condo, thru the pool area and voila, the beach! She and Kathy purchased some beach chairs and spent most days down by the water’s edge. Kathy’s husband Bill offered to teach me how to snorkel. I can honestly say it was fun but tiring! I was trying to concentrate on breathing under water without panicking. Swimming while floating on my stomach and trying to keep the waves from going over the top of the snorkel! I did see some fish and some jellyfish too! Bill snorkeled way on out into the deeper water. I think he said it was about 20ft deep where he was at and he stayed out there for a couple of hours. I need more experience and maybe a boat crew before I venture out that far! I barely swam back to the beach swearing I was going to finally get into shape and not the shape I am in!
One day as we were driving down to St. Andrews State park Bill spotted a converted red cargo trailer sitting in a parking lot. The side of the trailer had “Chicago Style Hotdogs”. Bill just had to have one so we whipped into the parking lot. The cargo trailer was permanently sitting in the parking lot on two flat dry rotted tires and converted into a kitchen. It’s a place I wouldn’t normally even stop at but with all the permits and stickers it looked legit enough so Bill and I both bought one. It was a pretty dog gone good  Chicago styled hot dog too! So I learned a lesson there. Never judge a cook by his trailer… 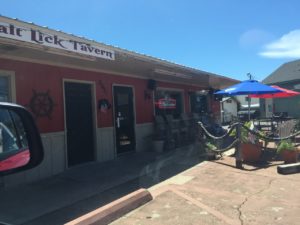 Another place we saw was the Salt Lick Tavern. 8021 Thomas Drive to be exact. It’s located on the main drag but in the PCB county part of Thomas Drive. The thing that caught our eye was the relaxing deck area out in front. The first time we stopped in there it hadn’t opened for the day yet. It was pretty early in the morning so we made a note to come back later in the day after they were open. A few hours later we went back and went in. The place was a nice tavern. It had a hand made horse shoe shaped bar that a local guy had built for them. The beer was extra cold too! Just how I like it! My wife was impressed with the atmosphere and one of the owners was there running the tavern. Her name was Angela. She was 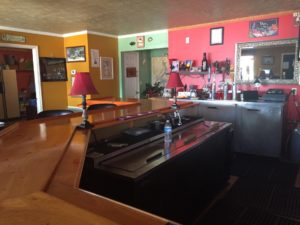 exceptionally friendly and gave us a brief history of the place. They even have a grill/deli area too! My wife had the cheese sticks! The prices were just right and my cousin even bought a shirt there! We liked the place so much we went back a couple of times before we left. Granted we visited in the day time but you can’t but like Salt Lick’s friendly atmosphere and they also give discounts to all Military personnel (active and retired.) So if you are in the PCB area, be sure and stop in and say hello to Angela and tell her Chuck, Denise, Bill and Kathy sent ya!

Enclosing, PCB was a great place to hang and hang with Bill and Kathy! It’s good to let life’s stressful days ease past you for a few days and recharge the batteries.We are already planning our next trip! (In October!)