I wish that quote was mine but it isn’t.  In fact, why do we even need to use a quote like that today?

Because over our morning coffee or our commute to work, a false ideology is wiping out people. Oh ISIS isn’t the only ones doing it. It’s everywhere. But they are currently the ones that have floated to the top of the cesspool of a long list of evil in this world. It doesn’t make any sense to me. We are all part of this huge planet and yet we still can’t get along. Most of us hurt instead of heal.We fight with our families, our neighbors, our co workers, the people in traffic, etc. The list goes on and on. Then our world leaders, who are in place to protect us, fight with other world leaders. Like I already said. It just doesn’t make any sense. And why do we do it? I dunno. I don’t have the answers. It will be easy for some to say, it’s Man’s “Sin Nature”. But in reality. That ideology is no different in some aspects as the ISIS beliefs are. Believe like we do or else. When our kids were young, a neighborhood bully was making his rounds. Our son may have been 10 at the time said to me as I was reluctantly showing him how to fight back  said “Dad, I only want to play”…

Speaking of a kid that only wanted to play.

In the story below instead of playing with other kids, She set herself on fire to keep from being raped…

Once again, why does this happen and why do we continue to allow it? No easy answers but it’s got to stop…Agree? 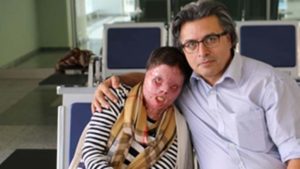 “Yasmin, 16, who feared another rape, wanted to make herself undesirable, so she doused herself with gasoline and lit a match. Badly burned, she is in a German hospital facing more than 20 surgeries.

“Now she looks like a zombie, and children cry when they see her,” Kizilhan said. “It is so difficult to see what the fire did to her.”

Here is the complete story and what some kind people are doing to help.