“Barton is currently beginning a 40 week investigation of a location in the Green river basin of Western Kentucky called Bigfoot mountain. Kickacts will keep readers posted on any exciting updates from the Kentucky Bigfoot Hunter!”

Hello Barton, and welcome to Kickacts. You and I go back a long ways, somewhere around almost 30 years, so welcome aboard my friend. You’re highly regarded and considered an expert on Bigfoot and other Mysteries and Legends. Tell us a little bit about yourself. 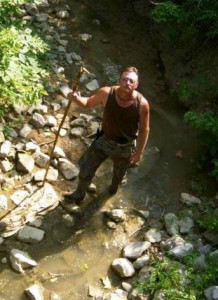 Hi, Chuck. Yes, we go back a long time. You know that, aside from being an ex-heavy metal singer, I’m just an ordinary guy. I don’t consider myself especially gifted one way or another. I have been investigating and researching unexplained phenomena for almost 30 years now, and I’ve been lucky enough (or unlucky enough depending on your point of view), to have my own personal experiences with much of the subject matter that I investigate and write about. Especially regarding the cryptozoological aspect of the unknown. I’ve personally encountered seven different varieties of cryptids in my life on over a dozen separate occasions. This gives me a certain perspective that most other self proclaimed “cryptozoologists” lack. While they are passing away the winter in front of their PCs and TVs, I’m out in the woods and swamps braving the elements and the unknown. My coat smells like campfire smoke year round.

You had an early experience with the Unknown. Eventually it became national known as “The Spottsville Monster”. Can you give us an idea of what was experienced by your family?

Back in 1975 my family moved into an isolated farmhouse near Spottsville, KY on the banks of the Green River.
It was idealic at first. My parents busied themselves planting eight acres of tobacco and a huge garden and us kids, after our chores were done, got to walk the ridges and fields looking for arrowheads. Everything started off great there. Then our chickens started disappearing. First only a few here and there. Then the losses started adding up, which really upset my father. To make matters worse our two extremely vicious dogs never even barked while it happened. I remember my dad hearing something big drinking water from the gulley in the woods behind our house just before dark one day and he couldn’t figure out what it could be. It sounded as large as a cow, I remember him saying, but there were no cows anywhere near our farm. He decided he needed to go get another shotgun and it was at that moment, I think, that fear began to creep in on all of us. Turns out it was well founded as what followed was basically eleven months of being terrorized by extremely big, hair-covered creatures that ended up killing nearly every animal we owned and 8 or 9 dogs we didn’t own. Every member of my family saw the creature(s), some better than others, and we weren’t the only ones. After years of research I discovered that the area has a long history of hairy monster sightings and other instances of high strangeness including UFO, spectral and other cryptid activity that continues to this day.

For the people reading that aren’t familiar with your work, exactly what is it?

I have three books out, “Mysterious Kentucky” (Whitechapel Press, 2007), “Bigfoot In Kentucky” (Whitechapel, 2011), and “The Inhumanoids! Real Encounters With Beings That Can’t Exist” (CFZ Press, 2011). I also have a DVD featuring an investigation into the Kentucky Werewolf mystery entitled “Hunt the Dogman”, (Grendel Films, 2007) and another coming out this summer about the Spottsville Monster mystery with McGill Media.

“Have you, our readers had an encounter with Bigfoot? Let us know…

It’s 2012. For the skeptics out there that may ask. Everyone, or in reality almost everyone has a cell phone on them with a camera and video camera. Why hasn’t anyone been able to get a clear photograph or video of Bigfoot or U.F.O or?

The answer is easy; they have! Just because you haven’t seen them doesn’t mean people don’t own them as we speak. Clear shots of Bigfoot and UFOs do exist. I’ve seen some of them myself. We have to be patient and realize that more authentic pictures and videos are being obtained with some regularity now. But so are the hoaxed ones, so we need to be overly critical of anything new that comes along – and it will.

You have appeared on MonsterQuest. I think it’s the most repeated episode of that series which is pretty cool. You also just recently spent some time with Larry the Cable guy that hasn’t aired yet. Can you tell us about that?

Larry was a great guy and the entire Kentucky Bigfoot expedition team had a blast and laughed our asses off, basically. It was hard to be serious around him, but we do take Squatchin’ very seriously which, hopefully, will come across when the episode airs in late March. 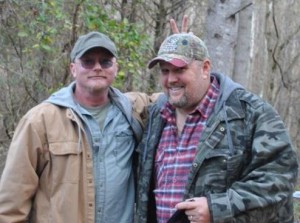 We showed him several techniques, like tree-knocking and call blasting. Larry didn’t believe in Bigfoot, he claimed, but when he did a crazy rendition of a Bigfoot vocalization something actually screamed back at him! Needless to say, we had a hard time convincing him that the series producer, Erik, had not set the whole thing up with us beforehand as a joke on Larry, which I assure you, was not the case. Larry was really gracious and later took the time to sign autographs and take pictures with all of us including a sizable crowd which awaited him at the gun range adjacent to the sighting area Charlie had lined up.

How are you treated by the production companies? Do they take you seriously or is it to them just another day at the office so to speak?

That would depend on the production company, I guess. They are all different. Some, like the ‘Only In America’ crew, just tag along and let you do your thing and others show up with a list of shots that they have to get and things that must be said or done. I much prefer the first kind. Reality TV isn’t as real as most people think.

You used to sing in a Metal band back in the day. We both survived the 80’s. Do you miss any of it? (editor’s note, I will hold off on posting any old photos of us from the 80’s but they do exist lol )

You’re kidding, right? I miss all of it, man!

Where can our readers get your books at?

How can you be contacted?

Stay tuned for the exciting part 2 from Barton M. Nunnelly !!!