Verbal jabs at each other. Seems Marilyn Manson has some issues with Rob Zombie. And in return Rob gives it back to him. Here is a short vid of Rob Zombie basically telling Manson what he can do…I think we need Lance Russell and Dave Brown for some ringside commentating! Does anyone get that reference????HELLO??

“As stupid as this all is, I feel I must clear things up a little better. First off, I want to thank all the fans who came out in the freezing cold in Detroit last night. It was a total blast as always.

Unfortunately things turned ugly backstage. Why? I don’t know, but for some reason our touring partner decided to end his set by blaming me for something that I had nothing to do with and screamin

g he was going to “kick Rob Zombie’s ass as soon as he got off stage”.

Go figure. I was backstage hanging, watching the show thinking “hey this is gonna be a great night”, when suddenly he starts screaming threats. So strange. I don’t get it. Christ, I’ve known some of his crew for 20 fucking years and some of his crew used work for me. It’s all good. No one would fuck with someone’s show. It is ridiculous.

Well, of course I felt the need to respond to the ” kick my ass remark”. Who wouldn’t? Although I wish I had kept it backstage and kept the fans out of it. It is all 4rd grade fight after school nonsense of which I have never dealt with on tour before. Co-headlining tours always go smooth because everything is cut 50/50 and I mean everything. No one fucks with anyone’s show. It is even fucking Steven.

I’ve done it co-headlining tours many times before and have had no troubles. Not with Pantera, Slayer, Alice Cooper, Korn, Megadeth or anyone ever. So I didn’t expect any troubles on this. It seemed like a great idea at the time.

But shit happens. Anyway, sorry to the fans who had to dealt with the embarrassing stupidity of it all. We are all there for the same reasons to give you the best show ever… that’s it.” 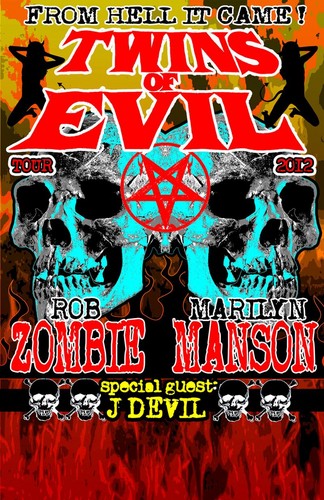